Bruce Gradkowski is the Steelers Gab Player of The Week 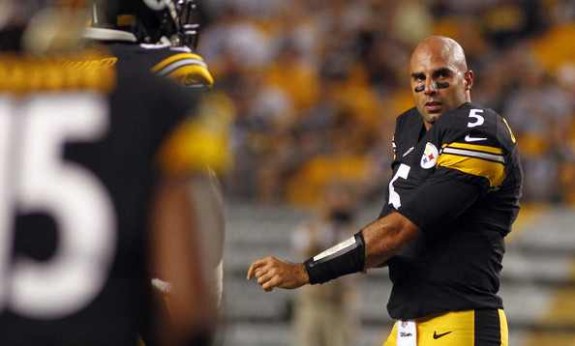 Pittsburgh Steelers quarterback Bruce Gradkowski played well against the Philadelphia Eagles, while the overall team effort was not very good. After not being very consistent the first few games of the 2014 NFL preseason, Gradkowski showed improvement. Gradkowski is the Steelers Gab Player of the Week.

Going into training camp there was a feeling that Gradkowski would be in competition with teammate and fellow quarterback Landry Jones for the top backup spot behind Ben Roethlisberger.   Against the Eagles, Gradkowski completed 8 of 11 passes for 105 yards and two touchdowns.  With his progress and Jones’ struggles, it’s clear Gradkowski is without a doubt the top backup quarterback for the Steelers.

Gradkowski showed the ability to connect on the deep balls as well as an ability to be accurate in the red zone. When Gradkowski entered the game in the third quarter, the offensive rhythm was flat.  He entered the game and commanded an offense with unproven offensive linemen and wide receivers  he has not played a lot of reps with.

Gradkowski has had his minor struggles in the preseason so far. Before the Philadelphia Eagles game Gradkowski had not lead the Steelers offense to any touchdown drives. Gradkowski has always showed multiple skills such as mobility and deceptive arm strength. With Gradkowski playing so well he likely will not play much next Thursday against the Carolina Panthers, possibly not playing at all.

Bruce Gradkowski’s performance should put Pittsburgh Steelers fan’s minds at ease in case Ben Roethlisberger is injured in a game.

Steelers Battle With Eagles Did Not Go As Planned
Sean Spence Injury Update: No Surgery for Steelers Linebacker