Steelers Battle With Eagles Did Not Go As Planned 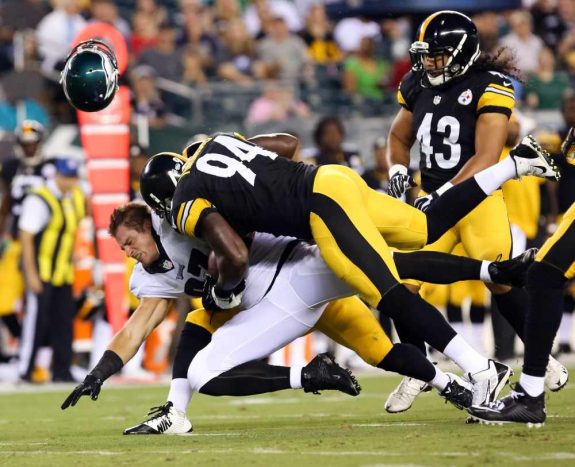 The Pittsburgh Steelers were not very impressive, to say the least, against the Philadelphia Eagles in their third NFL preseason game. The offense and defense had multiple struggles during the 21-31 loss. Despite that, there were a few bright spots.

A lot of bad plays were called. There were issues stopping the Philadelphia Eagles’ fast-paced offense. The running plays look slightly undeveloped and there were timing issues between the quarterback and wide receivers. Todd Haley must call more efficient and creative plays. Defensive coordinator Dick LeBeau must figure out his blitz and coverage schemes.  Head coach Mike Tomlin must motivate his players more.

The first team offense looked out of rhythm the entire first half. The only positive note for the first team offense was scoring a touchdown in the 3rd quarter. The running combination between Le’Veon Bell and LeGarrette Blount was ok, but not great.  The starting receivers, Antonio Brown and Markus Wheaton, offered very little.  The second and 3rd team offense did mange to move the ball more efficiently. Bruce Gradkowski passed for two touchdowns. Backup receivers Darius Heyward Bey and Martavis Bryant scored. Overall much improvement is needed.

The first team defense struggled. The lone bright spot was an interception by Troy Polamalu. The run defense could not contain running back LeSean McCoy. Philadelphia Eagles quarterbacks were able to able throw off the defense early with short passes and a fast pace. The second and 3rd team defense struggled as well, allowing two touchdowns in the second half. Not much of a pass rush was ever generated. Overall there was no one players that stood out and made a huge difference.

Nothing flashy,but not horrible either. The special teams defense did not allow a touchdown to be returned on kickoff or punt return. Kicker Shaun Suisham missed a field goal yet again this preseason. The punting position remains unsettled. No big returns for the Pittsburgh Steelers return team.

SteelersGab POW: Steelers’ Ryan Shazier In The Center Of Positive Attention
Bruce Gradkowski is the Steelers Gab Player of The Week