Steelers Offensive Line: The Battle Of The Big Men Up Front 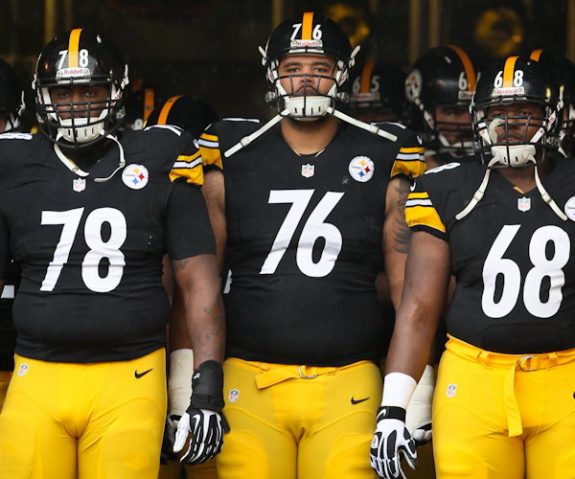 The Pittsburgh Steelers offensive line will face it’s biggest test of the season against the Carolina Panthers. Carolina has a great combination of run-stuffers and pass rushers. While the Steelers have superb talent in the interior of it’s offensive line, the battle up front will be a sixty minute affair.

Panthers defensive end Greg Hardy will miss this game due to an off field issue, so the main pass rusher to keep tabs on is defensive end Charles Johnson. Marcus Gilbert will have the assignments of blocking Johnson. Gilbert clearly has the size and strength to block Johnson, but he must show he can deal with the array of pass rush moves Johnson has. Gilbert was paid big money to block pass rushers but struggled last week.  Another Panthers defensive player who has steeped up in Hardy’s absence is defensive end Mario Addison. Addison recorded 2.5 sacks against the Detroit Loins.

Left tackle Kelvin Beachum will be counted on to keep Addison out of the backfield.  Beachum will be tested by Addsion’s quckiness and first step as Addison has great momentum heading into the game.

In the interior, Pro Bowl center Markice Pouncey and guards David DeCastro and Ramon Foster will have their hands full dealing with defensive tackles Colin Cole and Star Lotueleti. Cole and Lotueleti have done a wonderful job holding down down the Panthers’ defensive middle thus far this season. Lotueleti has been a stable force since his rookie season. DeCastro has improved at at steady rate blocking larger defensive tackles since his rookie season. Pouncey will have plenty of opportunities to block both Cole and and Lotueleti in double teams and one on one blocking. Left guard Ramon Foster will be the main one who will block Cole on Sunday night. Foster has been consistent the past couple of seasons and will need to show he can block  in one-on-one situations in order to keep Pouncey free so Pouncey can pull more and focus on stopping any blitz directly up the middle.

Whoever has control in the trenches will dictate the flow of the game. Both lines have talent. It will be interesting to see which side wins out.