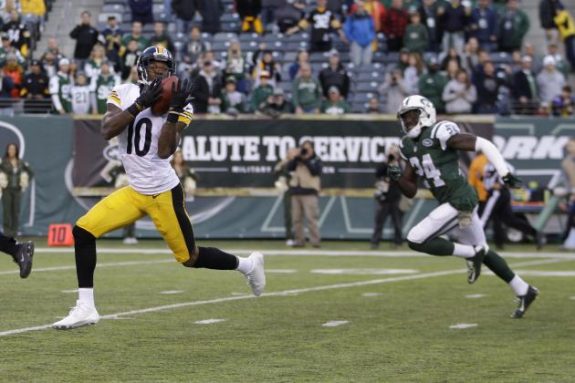 Rookie Martavis Bryant provided some positivity on a day in which there was not much to be proud of.  Against the New York Jets, Bryant had four catches for 143 yards and a touchdown.  For his performance Bryant is the Steelers Gab player of the week.

In four games Bryant has six touchdowns receptions. On Sunday, the deep ball option was missing for the Steelers until late in the fourth quarter. Since Bryant has received more playing time, he has been the teams best deep threat. His ability to catch passes anywhere has forced defenses to account for multiple receivers on each play. If the offensive play calling had been more aggressive against the Jets, Bryant could have had a career day.

Bryant has shown improvement in each game in his route running, catching skills and recognition of opposing defenses. If Bryant can continue to be consistent, the Steelers offense will remain dangerous on every play. Sunday became a day off for most of the team as they allowed the game to slip away from them. Hopefully the team can build off of Bryant’s performance. It’s likely Bryant’s role in the offense will expand in the coming weeks. As his role expands, hopefully the victories increase.

Five Takeaways Following the Steelers Loss To The Jets
Rivers, Dean: A Dissection Of The Pittsburgh Steelers In 2014