Five Takeaways Following the Steelers Victory Over The Titans 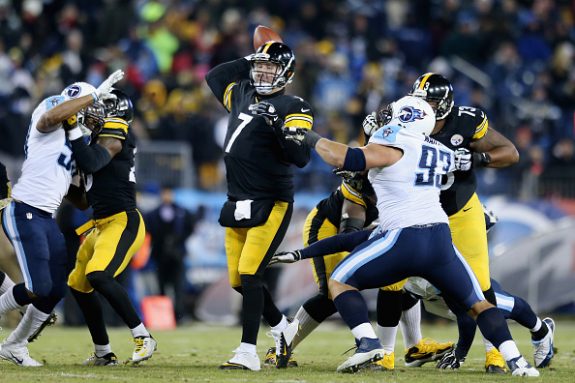 If your heart has finally slowed down after the crazy night Monday against the Titans, it’s time to take a step back and figure out what it all means after the Steelers huge 27-24 win over Tennessee to enter the bye week at 7-4.

The team has five games left, a chance (as crazy as it sounds) to go 12-4, which considering it would mean two wins over the Bengals if they run the table, a division title and possibly as high as the #2 seed in the AFC (with the way the Broncos are getting beat up with injuries).

But as usual in life, that’s so much easier said than done, and a lot has to happen before that, so let’s cover five Takeaways from the win over the Titans, as well as how things look going into and maybe coming out of the bye week for the black and gold.

1. Credit the Defensive Adjustments – It’s been easy for most of the season to heap insults on the defense for allowing big plays, and while they did give up 24 points to the Titans, let’s also give them credit for the way they stopped the Titans in the fourth quarter. After the Titans touchdown from Zach Mettenberger to Chase Coffman that made it 24-13, the defense was lights out the rest of the way. Tennessee ran 7 offensive plays in the fourth quarter, gaining a total of 20 yards. Whatever Dick LeBeau and the defense called, it worked.

2. It Felt Like Truly “Steeler Football” – When the Steelers took the ball over with 6:58 to play nursing a three-point lead, of course the optimist in me thought “I would love to see a 7 minute drive here,” but the realist felt 2-3 minutes off the clock would be more likely. Little did I see coming what took place, and that’s a flashback to old “Steeler Football,” where five guys and a bruising back took the game over, running out the clock. This team needed a moment like that, and let’s hope it carries over after the bye week.

3. Ben Showed Some Serious Toughness – It wasn’t exactly an easy night for the Steelers QB, as the Titans blitzed the heck out of him, and while they sacked him five times, they got to him and got their licks in often. Roethlisbergers’s numbers were 21-for-32 for 207 yards, but he was an effective 6-for-9 for 67 in the Steelers two touchdown drives and final drive of the game to seal the win. He also may have saved the game with a four-yard run on third down early in the TD drive to draw within 24-20. He didn’t have the gaudy numbers like the Colts and Ravens games, but played his heart out.

2. This Team Controls Its Own Destiny – The Steelers get a much needed and deserved bye week, but once they come out of it, with five games left this team controls where it will go and how long it will play for in the 2014 season. The final five are: vs Saints, at Bengals, at Falcons, vs Chiefs, vs Bengals. If they have to lose one game, fans should hope it’s either the Falcons or Saints games. Bottom line is if they beat the Bengals twice, and beat the Chiefs at home, they should win the division at 10-6. If they don’t make the postseason or win the division, they only have themselves to blame.

1. Bye, Bye Blount – LeGarrette Blount’s career with the Steelers should be over, 11 games into his two-year deal. He walked off the field with time remaining on Monday night, and reports say the team hasn’t been happy with him for his attitude over the last month. With that, it’s better for Mike Tomlin and Kevin Colbert to cut ties with him than waste any more time and also allow him to be a cancer to this team. Here’s hoping they can find a back on the free agent market to backup Le’Veon Bell, and dump Blount, who has had just a few minor shining moments with the team. He’s been on four teams in five seasons, and the Steelers are finding out why.