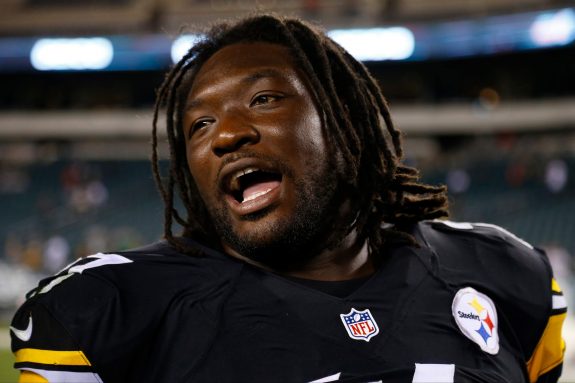 Running back LeGarrette Blount wrote his own bus ticket right out of Pittsburgh with his unprofessional handling of lack of playing opportunities against the Tennessee Titans on Monday night added to what has been an ongoing internal issue while he has been with the Steelers this season.  Less than 24 hours after Blount walked off of LP Field before the game ended on Monday night in Nashville, Blount was given a pink slip from the franchise.

According to insiders, Steelers linebackers coach Joey Porter initially witnessed Blount leaving for the team bus and called the player back into the locker room on more than one occasion – Blount returned just long enough for post-game interviews to begin and was once again out the door.  His Steelers teammates and coaches were not impressed with Blount’s handling of a frustrating personal situation.

On Tuesday, head coach Mike Tomlin issued the following statement: “We believe the decision to release LeGarrette (Blount) is in the best interest of the organization and wish him the best of luck.”

Some could take that as ‘don’t let the door hit you on the way out’, but Mike Mitchell defended Blount as a person.  “I actually know him, and a lot of people don’t know him,” said Mitchell.  “He is not a selfish guy at all.  He is a competitive guy who wants to be on the field, wants to win games, wants to help us win games.  It’s a bad perception I think he gets a lot of times, but he has to be smarter in that situation.”

Pro Bowl center Maurkice Pouncey told the media, “If you don’t want to be here, don’t be here.  (Blount) had a decision to make as a man, and he made it.  You know the consequence.”

Blount will now have an opportunity to show the level of intelligence and maturity gained after being shown the door by the fourth team in five seasons.  Blount signed a two-year, $3.85 million contract with the Steelers in March but only his $950,000 signing bonus was guaranteed.  The Steelers will only count against the Steelers’ salary cap in the amount of $475,000 in 2015 – money well worth giving up if the Steelers felt he was poisoning the locker room.

Rookies Dri Archer moves up on the roster behind Le’Veon Bell and Josh Harris was promoted from the practice squad following Blount’s release on Tuesday.  Rumors that recently-released Cleveland Browns rusher Ben Tate would join the Steelers have proven false thus far.

With depth at the running back position a question mark this late in the season, many are hitting the panic button.  Perhaps a bit too quickly.  Before the 2014 season even got off to a start officially, talk of Bell and Blount being the one-two punch the Steelers needed to get a ground game going were the rage.  Dri Archer was meant to compliment the duo in certain situations, mainly as a scat-back.  The picture became muddied by off-field actions as Blount allegedly took second-year back Bell under his wing and the two got involved in poor decision making and received legal charges for marijuana – breaking a league substance abuse policy as well.

Bell began playing as if he wanted to redeem his image in Pittsburgh and although Blount was averaging 4.6 yards per carry for his career it began to become more apparent that instead of boosting his “best friend” and teammate, Blount was going to take Bell down a notch too.  Ed Bouchette and other Steelers insiders verified that there was some hard feelings within the locker room over what many felt was an increased level of self-interest over team-first interest from Blount.

To have a bye week ahead and part ways with Blount so quickly speaks volumes about the level of concern the coaching staff and team as a whole was experiencing in regards to his attitude and mentality.  Bell is ranked second in the league with 951 rushing yards and had earned the starting position on offense.  Blount could have easily been dynamic beside his friend and teammate – instead, he was unsatisfied, and it cost him.

The Steelers have the option of reaching out to another free agent to bring in to fill the spot.  There are plenty of guys out there who would jump at the chance to be able to get the opportunity.  If Blount didn’t understand the level of commitment and integrity the Steelers expect from their players, even when given second chances to make things right, he certainly got a clear message when the team released him.