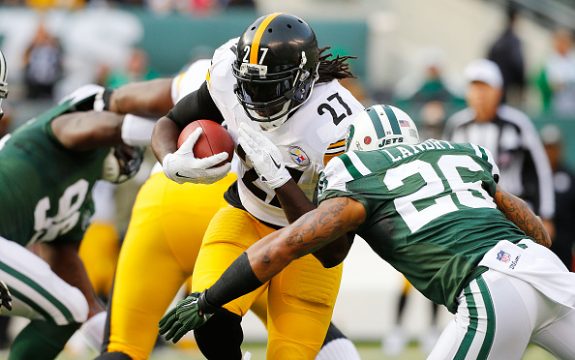 You would think all would be happy in Steeler Land following a huge comeback 27-24 win over the Tennessee Titans that puts the team at 7-4 heading into the bye week.

For at least one player on the team, that’s not the case.

Ed Bouchette of the Pittsburgh Post-Gazette reports that backup running back LeGarrette Blount walked off the field an unhappy camper, peeved about only having three carries in the Steelers win.

Blount had to watch his teammate and feature back Le’Veon Bell go off for 204 yards and a touchdown the win. It was the first rushing TD for the Steelers since a Sunday night win over the Panthers September 21st, a span of 31 quarters.

Bouchette reports that Blount “dressed and left the locker room, apparently headed for the team bus that would take them to the airport.”

The Steelers beat reporter also added that “At least one player thought they should leave him in Nashville.”

Strong words to say the least about Blount, who has not had all that much impact on the Steelers in his first season with the squad.

Blount has 266 yards rushing this season on 65 carries, a 4.1 yards per carry average. He’s been average at best in short yardage situations, and last week in two carries inside the five against the Jets, was stuffed on first down, and lost 8 yards on second down.

The Steelers had to settle for a field goal on the drive in the eventual 20-13 loss.

The report from Bouchette adds that Blount has been a problem for the team for at least the last month, and has been “dragging down” Le’Veon Bell, though Bell had a huge game on Monday night, going for 204 yards in the win.

Maybe the team should have seen this coming with Blount, as it’s his fourth team in five years, and he lasted quite awhile on the free agent market before inking a two-year deal worth $3.85 million, including a $950,000 signing bonus.

With this latest turn of events, it appears him finishing that contract is going to be a lot tougher than first expected.

Jekyll and Hyde: Steelers Rally From Down 11 To Top Titans 27-24 In Nashville
Mike Tomlin’s Post-Game Comments After The Win Over The Titans