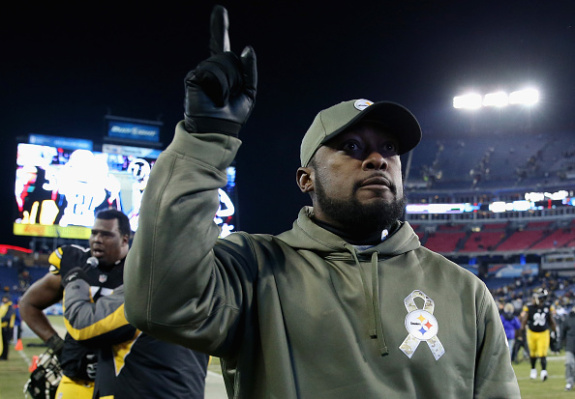 Coach Mike Tomlin: Not perfect, but really just a great night for us in that we were down by 11 and we had a great opportunity to bounce back. Any time you can do that and gain victory you grow from it and you grow from it in a right way. A lot of positive contributions. A lot of guys not blinking down the stretch. We also did some things to put ourselves in that situation. In the first half of the game we stalled in the red area on offense. We gave up a big play on defense in situational football. You can’t do that. You’ve got to be able to anticipate those things. We had a couple of penalties in the return game that negated a couple of nice returns. We had a punt return to midfield; we had a block in the back on that. We had a decent kickoff return that made us start on the minus 10. We have some things that we need to work on during the bye week. We can potentially get some guys back from a health standpoint. We’re not going to speculate about that right now. We’ll assess that when we get back in Pittsburgh. But right now we don’t take things for granted. Monday night, AFC road wins, big ball for us, big night for us.

Can you talk about the play of Le’Veon Bell?
I am not going to say anything about Le’Veon that I hadn’t said before. He is a good, young player. He wants to be a central reason why we are successful. He can do it in the running game. He can do it in the passing game. Tonight it was more of the running game. Our guys up front did a heck of a job of getting hats on hats and blocking the looks. Those weren’t easy looks. They got aggressive down the stretch and it was a bunch of people in the box and he was still having an opportunity to get on a safety. He is going to get a lot of recognition, and I think a lot of recognition is deserved for everyone.

What prompted the decision to go to Le’Veon so much tonight and not all season long?
He has to be closing in on 1,000 yards. He has run this ball some. Some games we feature Ben (Roethlisberger) and what we are capable of doing outside. Some games we feature him. Some games we try to feature both and be balanced. It’s really about how the game unfolds inside the stadium. We saw some looks tonight that we felt comfortable we could get hats on hats because their defense structurally is built like our defense. I am sure they felt the same way about some of the looks we provided them. I’m sure they’ve seen some of those looks in practice and so forth. The stage was set for him to have a good night and they did the job.

What changed putting more pressure on Zach Mettenberger in the second half?
I don’t know if we did. I think we spent so much time watching the game because our offense possessed the ball and that creates a certain amount of urgency or frenzy when a team is possessing the ball the way we were possessing the ball. I think that created that sense if you will.

What does it say about this football team that you can have a 500-yard passer one week and a 200-yard rusher another?
We’ve been very upfront that we want to be a very balanced group. We want to be a group that’s capable of stepping in the stadium and throwing with anybody in the NFL. We want to be a group that is capable of stepping in and running with anybody in the NFL. I think we are rounding into form in that regard. And then we can just do what the game presents to us. I think that is a recipe for real long-term success. We still have to get better in the red area. We kicked two field goals and threw an interception in the first half. That put us in the situation that we were in.

What happened on the long touchdown pass to Nate Washington?
They dialed up a double move and got us. They protected it, they ran a good route and he executed a throw. At the same time we are talking about 80 yards away from pay dirt. It’s situational football. There’s 40 seconds left to go in the half. That’s unacceptable. We have to be better than that. I tip my cap to those guys. It was a nice call. It was great execution. But we have to be better than that.

Was there supposed to be safety help on that play?
I am not getting into all of that. I said we accept responsibility for it. I tip my cap to those guys for execution.

It seemed like you went with three receivers instead of interchanging them. Was there a reason?
We interchanged. We used 85 (Darrius Heyward-Bey), 16 (Lance Moore), 10 (Martavis Bryant), 11 (Markus Wheaton). We played in a very similar manner that we’ve been playing for a number of weeks.

Report: Unhappy Blount Leaves Field Before End of Win Over Titans
Five Takeaways Following the Steelers Victory Over The Titans