Jekyll and Hyde: Steelers Rally From Down 11 To Top Titans 27-24 In Nashville 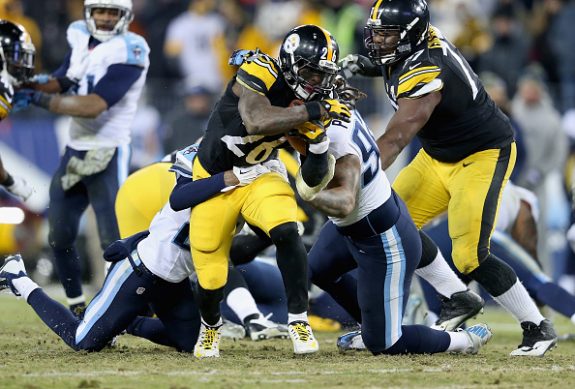 The Steelers sure do know how to make it interesting.

It was a roller coaster of emotions Monday night in Nashville against the 2-7 Titans, leading at one point 10-0, then after a wild turn of events trailed 17-13 at half, and 24-13 entering the fourth quarter.

But give a ton of credit to the black and gold, as they fought their way back, scoring two fourth quarter touchdowns while holding the Titans scoreless, and in the end using a six plus minute grind out drive to end the game, holding on to a critical 27-24 win.

The victory puts the Steelers at 7-4 on the year, and they enter the bye with five games left, three of which will be on the road, including the final two against the Chiefs and the Bengals.

The game ball goes to running back Le’Veon Bell, who on a national stage put on the performance of his career, going for 204 yards on 33 carries, a whopping 6.2 yards per carry average.

The performance was cemented when the Steelers held Tennessee to a punt with 6:58 remaining. They got the ball on their own 19-yard line, holding a three-point lead.

They ran Bell 8 times in the drive, getting five first downs and running out the last near seven minutes to seal the win.

Bell’s effort was almost wasted, as the Steelers took a 10-0 lead in the first four and half minutes, getting a 49-yard field goal from Shaun Suisham, and then a pick six on the Titans play by William Gay, and then gave it right back to go into the half down 17-13.

Things changed in a matter of two plays. Ben Roethlisberger threw a bad pick in the end zone looking for Antonio Brown that Jason McCourty ran out of the end zone for a touchback.

Instead of going in the locker room down 13-10, the Titans went for the kill, and rookie QB Zach Mettenberger found former Steeler Nate Washington for an 80-yard touchdown after he pulled a double move on Gay.

Things got worse in the third quarter, as the Titans drove down the field, and Mettenberger hit tight end Chase Coffman for a 4-yard score on third down to make it 24-13 with 3:42 to play in the quarter.

The Steelers though wouldn’t go down quietly, as they went to work with Bell rushing for 50 yards on the drive and Roethlisberger converting a huge third down play with a four-yard run.

The defense held the Titans to a three-and-out, and the offense went back to work, going down the field for the game-winning score.

Roethlisberger hit on four throws, including the touchdown from 12 yards out to Brown to give the Steelers the 27-24 lead with 9:01 to play.

The defense again stepped up, and Bell and the offensive line, led by the coaching of former Titans coach Mike Munchak, sealed the win with the huge final drive.

Roethlisberger was 21-for-32 for 207 yards with a touchdown and a pick. He was hurried quite a bit by the blitzing of the Titans, and took five sacks on the night.

The victory puts the Steelers as the current 6th seed in the AFC playoff race, and in second in the AFC North, behind the 6-3-1 Bengals.

The Steelers are back at home for a matchup with Drew Brees and the Saints on Sunday, November 30th, as they will rest this week with a much needed bye.