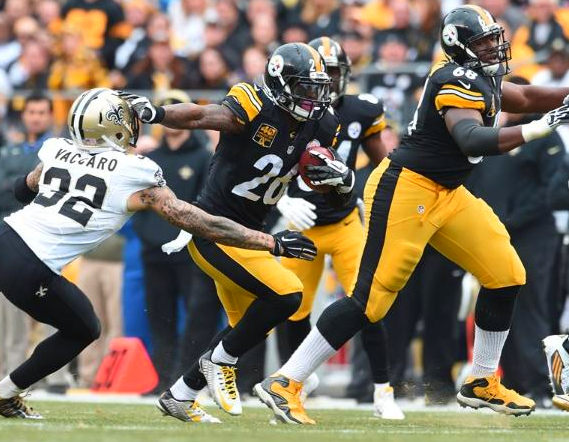 The Pittsburgh Steelers had extra time to prepare for the New Orleans Saints and the way the team played, they were nowhere near ready for Drew Brees and company.  Le’Veon Bell was easily the player of the week in the 32-35 loss that had a final score that made the game look a whole lot closer than it really was.

After the Saints won the coin toss and deferred, the Steelers offense came out flat.  It has been a trend for Pittsburgh during the 2014 season.  Pittsburgh scored first off of a Shaun Suisham field goal, but they were only able to put a total of six points on the scoreboard before halftime.  In the second quarter, Brees unleashed the Saints offense on the ground and through the air, finding tight end BenjaminWatson and fullback Erik Lorig for touchdowns.

With a meager performance by the Steelers defense, the Saints were able to not only chew up yards on the ground but given time to open up the field for Brees to choose his targets.  Despite the return of Ike Taylor and Troy Polamalu, the defensive backfield bit on double-moves and were burned several times for huge chunks of turf.  Poor tackling and pass defense only added misery to what defensive end Brett Keisel was feeling in an injured triceps, forcing him to leave the game.

Pittsburgh’s offense was hampered when Ben Roethlisberger slammed his throwing hand into a rushing defender and couldn’t pass the ball effectively.  He ended up handing off the ball the Bell with his left hand and trying to get the offense going.  Once again, Week 13 was a game that featured Bell, Antonio Brown and Heath Miller.  It was a team loss, but right now this team has to be wondering how they are going to match up against the AFC North-leading Cincinnati Bengals two times in three weeks (starting next week).

A late fourth-quarter move to the hurry-up offense appeared to be working, making one wonder why Tomlin and Haley didn’t move to it sooner.  Bell and Brown both had touchdowns late in the fourth with Bell and Lance Moore scoring on two-point conversion attempts to put the score at 32 to New Orleans’ 35.  Although the game clock indicated a single second left before the final two-point conversion, the officials chose to allow the clock to remain at 0:00, giving Pittsburgh the final points but zero opportunity to go for an onside kick and a last-ditch desperate play for the win.

Some may blame Shaun Suisham’s missed long field goal for the three-point loss, but the Steelers never should have required Suisham to have to kick that ball at all.  If the offense had performed at a higher level, the team could have earned the first down and gotten Suisham closer to the uprights or a touchdown.

The Steelers have to be concerned that their bye week did nothing to correct errors that continue to plague this team.