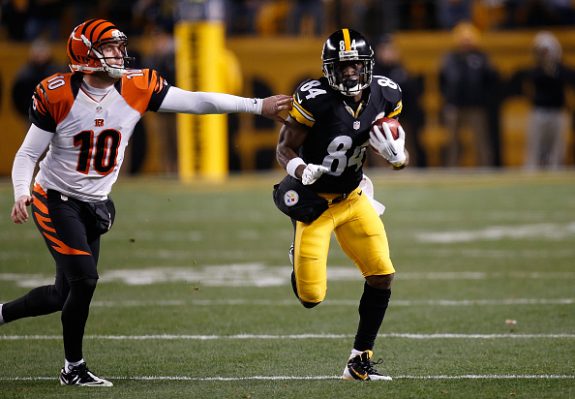 The Steelers needed big plays by their best wide out Sunday night to wrap up their first AFC North Title since 2010, but in the end, they got the job done to top the Bengals 27-17.

The win ends the Steelers regular season at 11-5, the first time they have ended the season with that record since 2005, a season that ended with a Super Bowl win over the Seattle Seahawks.

Brown became the first Steelers wide out in history to lead the NFL in receptions with 129 catches on the season. He also led the NFL in yards with 1,698.

The Steelers didn’t come out of the game without a scary moment, as running back Le’Veon Bell went down with a hyperextended knee in the third quarter after a hit by Bengals safety Reggie Nelson.

Bell jogged off the field but was in obvious pain as he was examined on the sideline. He eventually was taken to the locker room.

Roethlisberger went 24-for-38 for 317 yards with two scores and a pick.

The win means the Steelers will host the Ravens Saturday at 8:30pm at Heinz Field.