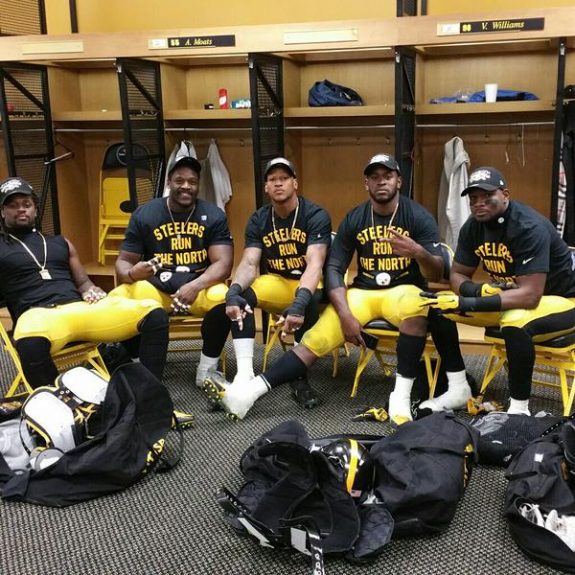 It’s official, the Steelers are AFC North Champs for the first time since 2010, the last time the team made it to the Super Bowl.

Oddly enough, they will take on the team they beat in the divisional round that season, the Baltimore Ravens.

It’s a different look four years later, as the Ravens needed help just to get to the playoffs, and even struggled into the fourth quarter to beat a third-string QB of the Cleveland Browns Sunday at home.

No matter, it’s a rival coming to town, and it’s all or nothing for a shot to head to Denver to play the Broncos.

With the win over the Bengals, we look at five things from the win, and five things to chew on as we put on our new AFC North Title gear and look ahead to Baltimore.

1. Bell’s Injury a Major Factor – There’s no doubt that of the three players of the ‘Killer B’s,’ running back Le’Veon Bell is the most versatile of the bunch. It’s being called a hyperextended knee for now, which is probably the best case for the club as they have six short days before Baltimore. Sure the team is going to say all the right things about using Dri Archer and Josh Harris, but let’s be real, if this team doesn’t have Bell, it’s going to be a tough go of it against the Ravens. Here’s hoping that Bell is a quick healer, as they are going to need it.

2. Young DB’s Continue to Step Up – Early in the season the Steelers corners seemed to be getting torched on just about every play. Now, as the team gets ready for the postseason, the young defensive backs are stepping up, and they are winning. Brice McCann had two picks, and Antwon Blake had seven tackles in the win over the Bengals. it will be interesting to see how they handle how these young guys play next week, with a QB like Joe Flacco who seems to have solid games at Heinz Field. If Ike Taylor and Troy Polamalu are ready, how much do they play?

3. More Pressure – While Andy Dalton did have a drive where he was able to dink and dunk down field for a touchdown to cut it to 20-17, overall the pressure the D put on Dalton paid off. They got three sacks in the win, and they seemed to rattle Dalton most of the night. They will need to do the same against Flacco, who they got to a few times during the win back on Sunday night in November. I like the pressure guys like Cam Heyward has gotten up the middle, and finally the D-line seems to be stepping up and doing a great job making plays.

4. How will the Young Players Respond? – Mike Tomlin and his staff will have a job ahead of them this week, and that’s to get young players that have never felt the rush of the postseason ready for a playoff game. It’s going to be a task that can’t get overlooked, and one that will prove the coaching efforts of Tomlin and company. Since the playoff loss in 2011, this team has been staffing itself for the playoff game that will take place in six days, and there’s no question that nerves will be high once the ball is kicked off Saturday night.

5. Defying the Odds – Let’s face it, no matter how this postseason ends up, the Steelers for the most part have already surpassed what the so-called ‘experts’ said they would. Go back and look at the picks in July and August, and not many felt that the Steelers would be hoisting another division title, much less having won 11 games. They did it, and while we all want to see them go the distance, there’s a bright future with young players littering the roster, and that’s something to get excited about with this organization.