A Bitter End To The Season For Steelers 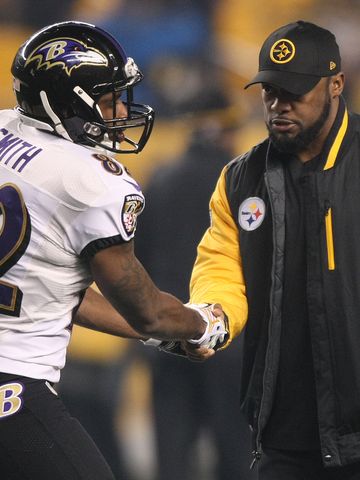 The Pittsburgh Steelers’ 2014 season ended in one of the worst possible ways; losing to arch rival – the Baltimore Ravens – 30-17 at Heinz Field in the Wild Card round of the NFL playoffs. A combination of sacks, dumb penalties, and turnovers led to the season-ending loss.

Coaching: The Steelers tried 3 running backs and none of them provided a soark. Offensive playing was conservative throughout much of the second half. There were not enough pass plays called in which the football was thrown at least 20 yards down the field. The defense blitz schemes only led to one sack,and only one turnover.  Special teams was not Special at all with no big plays in the return game.
Grade: D

Offense:  Running game was below average to say the least, which made the passing game predictable with only 68 yards rushing. Offensive line allowed 5 sacks, and failed to generate any push in the run game.  The interceptions late in the fourth quarter by Ben Roethlisberger hurt the Steelers’ chances. When you can run, block at least for 5 seconds and your play calling is conservative your chances of scoring 20-30 points are slim to none.  Grade: C

Defense: Struggled to get sacks, and turnovers with only one apiece  Corners allowed to many catches underneath, and did not tackle well.The defensive line struggled early in the first half vs the run. A dropped interception by Brice McCain was key, as well as pass interference calls, and unnecessary roughness calls.  No spark from the bench players or starters.
Grade: D

Special Teams: Shaun Suisham converted 3 of 3 field goals. No spark in the return game and. Shamarko Thomas’ blocked punt was nice but it was clearly too late.
Grade: C