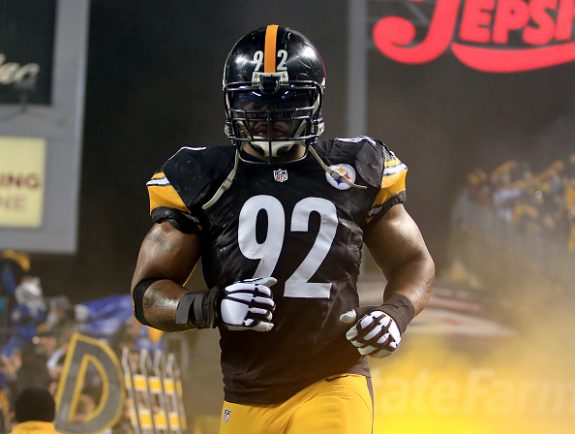 The second the clock struck zero on the Steelers season last night, many fans and even those in the organization started to look ahead already to 2015.

The 2014 season ended short of their goals, and the fact this team hasn’t won a playoff game in four years, and just one division title in those four seasons in unacceptable.

As they embark on the offseason, a number of questions will have to be answered about the overall direction of the team. No question that they defensive backfield will and needs to look different once they take the field in September.

The O-line, which despite playing poorly Saturday night, will also need to be better in 2015, and moves could be made with that.

Then there is the question about the veterans, a number of which likely put on a Steelers uniform for the final time Saturday night, and if any will return in 2015.

With all that said, here’s the list of free agents for the black and gold for 2015, and some early thoughts as to who may come back or who may go elsewhere.

Jason Worilds OLB UFA – The team made Worilds the fourth highest paid LB in the game in 2014, and he fell awfully short of where they felt he would be. He did come on late in the year, ending the season with 7.5 sacks, 59 tackles and a pick. At the end of the day, he wasn’t the fourth best LB in the game, and at 26 it’s going to be interesting to see if the Steelers offer him a big deal to return or if another team gives him big bank to leave.

Prediction: The Steelers give him a decent offer, but another team blows that offer away, severely overpaying and sending Worlids packing.

Ike Taylor CB UFA – Taylor is 34, played in just five games in 2014, and won’t be back next season. His best football is well behind him, and even his time as a starter has come to an end in all likely. If a team wants to pay him to come in and be a backup, so be it, but it won’t be with the Steelers.

Predicition: The writing was on the wall when he was inactive for the final two games – he won’t be back in 15.

Will Allen S UFA – The 32-year-old played in all 16 games in 2014, but again was part of a secondary that allowed way too many yards, and way too many big plays, making it likely he’s played his final game with the Steelers after they gave him a two-year deal back before the 2013 season.

Prediction: Allen is an excellent person, doing a lot of charity work, but that said he’s also played his best football after being drafted by the Bucs in 2004 in the fourth-round. He will probably get a 1-2 year deal, but it won’t be in Pittsburgh.

James Harrison OLB UFA – Harrison saved the the team when he returned after injuries ravaged the team after an early season win over the Panthers. He admitted Saturday he’s not ready to talk about the future. “We’ll see. I’m not going to answer a question [about the future] right now because I’m not in the right mind frame.” He was the emotional leader of the team and played a ton better in the final 8 games, putting up 5.5 sacks on the year. He won’t go anywhere else, so it’s up to Harrison and the Steelers if he plays again in 2015.

Prediction: Harrison looked spry and as determined as any player on the field in the last few weeks, and it would be insane for the Steelers to not offer him a two-year deal. He may be 36, but don’t count him out. I think #92 is back and making plays in 2015.

Matt Spaeth TE UFA – Spaeth was mostly a blocking TE in the two years he was back with the team after playing for a couple seasons with Chicago. Due to injury he only played in 19 games in the two seasons back and only had four catches in those 19 games. He would come cheap if the team decided to keep him, but on the other hand at 31 he may have a hard time finding a lot of work in the league as teams will look at his numbers and wonder truly what he’s worth.

Prediction: If he’s willing to come back cheap, maybe take a flier on him, otherwise draft a TE or pick up one in free agency that can be more productive catching the ball.

Greg Warren LS UFA – The 33-year-old has played in 133 games, and always seems to do his job. If he’s willing to come back, give him another year or two to snap for the team.

Prediction: No reason he shouldn’t be back.

Arthur Moats OLB UFA – The vet stepped in and did a nice job when called upon when injuries hit the team in the LB core. He ended the year with four sacks and two forced fumbles, and at 26 the team could use a guy like him to call upon as a backup or spot start player.

Prediction: Appears the coaching staff really liked Moats, and that he in return liked being with the team as well. The two should come to an agreement on a two-year deal for a return.

Brice McCain CB UFA – A big part of the turnaround of the secondary for the month of December, at 28 the team will give him a shot to come back and be a part of that unit again.

Prediction: One-year deal for McCain to be back again.

Prediction: Won’t be Back.

Michael Palmer TE UFA – Did little with the team, shouldn’t be back.

Prediction: Will be looking for a new team.

Clifton Geathers DE UFA – Didn’t play in a game, no reason to think he will return.

Prediction: Won’t be Back.

Josh Harris RB ERFA – The decision by coaches not to play Harris from the start of the Wild Card loss against the Ravens is still troubling. With that, the team could and should give him a worthwhile shot in 2015 to backup Le’Veon Bell, and at worst be the third string if the team gets a veteran backup.

Prediction: Team will bring him back.

Robert Golden S RFA – The undrafted free agent came on this season, playing a decent special teams. Can’t see any team giving him an offer – so he should get a

Antwon Blake CB RFA – Blake stepped in and played a large supporting role at the CB spot late in the season with the major issues with Cortez Allen and Ike Taylor. The team liked what they saw late from Blake, and they should give him a shot in preseason to be a contributing factor in the secondary in 2015.

Prediction: Team should give him a fair offer to return.

Will Johnson FB RFA – Will be interesting to see how much the team values Johnson, who never gets much of a shot to touch the ball, but still plays a decent fullback. At 26, another player the team may give a decent offer to come back to the team in 2015.

Prediction: Will be back.

Brad Wing P ERFA – As an ‘exclusive rights free agent’ like with Harris, the Steelers will deal with Wing, and make sure a deal is done for him to come back. He was an effective punter for the team, averaging 43.7 yards per punt, and he may have solved a big need for this team going forward.

Prediction: A deal will get done.