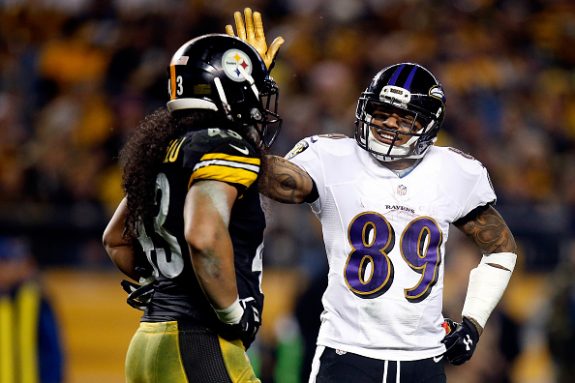 The Steelers playoff magic against the Baltimore Ravens ran out Saturday night, as with no Le’Veon Bell the Steelers lost badly at home 30-17.

The loss is the first to the Ravens in four playoff games, and while it appeared early the team could overcome losing Bell, they missed him more than they could know.

Ben Tate, who signed with the team Tuesday, started and couldn’t help the team, and even hurt them when a ball in the fourth quarter tipped off his hands and was picked off by Ravens LB Terrell Suggs.

Ben Roethlisberger wasn’t as effective as was the last time the two teams played. He was able to throw a fourth quarter TD to Martavis Bryant, but overall it was a long night for an offense that was so good in the month of December.

He wound up out of the game at one point, taking a hard shot and his head bounced off the turf. He missed a few plays in which Brad Gradkowski threw a few passes to get the team a first down. On Ben’s first play back, he threw a pick in the end zone, ending any slight playoff hopes the black and gold had.

The Steelers were killed by penalties all night, and a lot will be made of it, as Pittsburgh had 7 calls against them for 104 yards, while the Ravens were called for just two penalties for 14 yards.

Baltimore led 10-9 at the half, but put up 10 crushing points in the third quarter, as the Steelers did nothing on offense and couldn’t stop two Ravens drives that led to points.

The Steelers offense remained inept, but finally they were able to get back in it after Justin Forsett fumbled and the Steelers recovered.

They went for the kill, and Ben hit a long ball to Antonio Brown to get the ball to the one after they reviewed the play and called the original touchdown back.

After a false start, Ben hit Bryant with a score to make it 20-15 with still 11 minutes left to play, giving the team a ray of hope.

The defense couldn’t stop Flacco and the Ravens, as they were able to get in position for a Tucker 52-yard field goal, making it a 23-15 game.

The desperate Steelers couldn’t do much after getting within five, as Baltimore put up another seven as Flacco hit TE Crockett Gillmore with a 21-yard score with 7:56 left to make it 30-15.

A late blocked punt finished the scoring at 30-17.

A painful loss to a season that was as up and down as one could be.

Steelers: How Far The 2014 Rookies Have Come
A Bitter End To The Season For Steelers