Steelers: How Far The 2014 Rookies Have Come 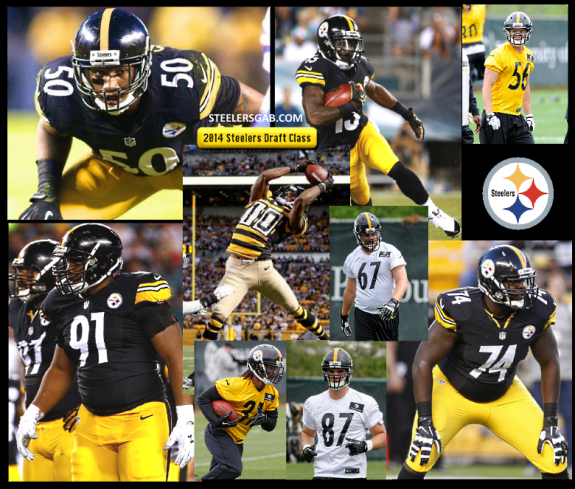 The Pittsburgh Steelers 2014 rookie class was given an “A” grade by draft expert Mel Kiper shortly after the 2014 NFL Draft was over. With many ups and downs the Steelers rookies have come a long way and several of them have played a big role in helping the Steelers win the AFC North division and reach the playoffs.

First round pick Ryan Shazier has been injured often. When healthy, he has flashed his speed and quickness.  Needs improvement recognizing the run and shedding blocks.  Looks to be a future 10-year starter if his health allows.
Grade: B

Second round pick Stephon Tuitt started slowly, but has come on strong as of late.  Every game Tuitt has started the Steelers are undefeated.  Excellent run-stopper and bull-rusher. Could very well develop into the next Aaron Smith
Grade: B+

Third round pick Dri Archer has been the biggest disappointment. His speed has yet to translate on to the field.  Zero touchdowns with the team so far. Probably won’t play much if at all in the playoffs.
Grade: F

Fourth round Pick Martavis Bryant has been the deep threat the Steelers sorely needed since week 7. 8 touchdowns thus far this season, and clearly he is starting to emerge as a playmaker. Still has a ways to go in understanding zone coverage, but when he figures it out he could very well be a top 15 wide receiver.
Grade: A-

Sixth round pick Daniel McCullers has provided valuable snaps as the backup nose tackle. Gained some starting experience this season,will aide him in the future. Came into the league needing serious work on his technique, and has shown signs of improvement.  Potentially a starter in a year or two
Grade: C+

None of the rookies should be considered pro bowlers as of yet, but Shazier, Tuitt, Bryant, and Mccullers are showing signs of being above average starters down the road. Their performance in the playoffs will give greater indication if they are ready to become leaders now or need more seasoning.  Either way you look at it, it is one of the most intriguing draft classes for the Steelers in quite some time.
Overall Draft Grade: B

One thing that is difficult to do with the Steelers organization is come out with a draft grade.  It is mainly due to the fact that Pittsburgh is known to develop their rookies over time.  Some have been given opportunities to get more in-game snaps while others haven’t seen time on the playing field.

Round 5a pick Shaquille Richardson, a cornerback out of Arizona, didn’t see much action with the Steelers.  Vanderbilt offensive lineman Wesley Johnson (round 5b), UCLA linebacker Jordan Zumwalt (round 6a), and Massachusetts tight end Rob Blanchflower (round 7) were all placed into backup roles and often inactive.

Richardson is currently a free agent who reached an injury settlement after an injury-plagued preseason.  Johnson was picked up by the New York Jets when he was released from the practice squad before the Steelers could re-sign him.  Zumwalt remains with the team but was placed on the injured-reserve list.  Blanchflower is on the practice squad.

Shazier has been utilized more by the Steelers defense, as has Tuitt. Both look to be contributors in the playoffs as they’ve developed and learned Dick LeBeau’s system.  The duo could be graded at a “B” at this point in 2014.

When McCullers has been given snaps with the defense, he has shown an ability to be an effective run-stopper with good awareness moving down the defensive line.  Unfortunately, McCullers is behind Steve McLendon who has been doing well this season.  McCullers looks to be a player that the Steelers want to develop and hold onto.  Grade: B-

Archer hasn’t had much playing time and the current Steelers offense doesn’t appear to cater to his skill-set at this point.  Look for him to get more opportunities in the playoffs.  If he can’t improve his game or find a spot in the offense, Archer may be a casualty after the season.  Grade: C

Bryant took some time to develop into the type of receiver the Steelers needed to compliment veteran Antonio Brown.  He has had some big plays and made several critical catches as a taller target for Ben Roethlisberger.  Bryant looks to be stepping from a developmental role into a starting one, which is great news.  Grade: A-