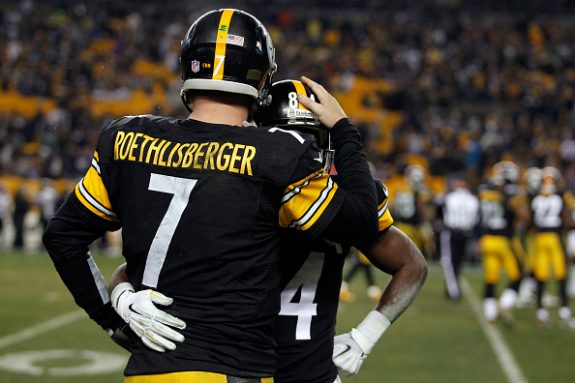 The season is over, and as painful as it is it’s time to look back to the awful end last night as the Steelers, who were red-hot winning four straight to get to the playoffs, fell 30-17 to the Ravens to end the 2014 campaign.

Here’s five things to chew on from the loss.

1. Field Goals Don’t Win Games – Unless you kick say, 10 of them, field goals after long drives are almost flat out a defeat, and three times in the first half the Steelers came away defeated after settling for field goals instead of touchdowns. The Steelers held the ball for 12 minutes in the first quarter, and yet led it just 3-0. Turn one of those three’s into 7 and you go into the locker room at half up 13-10, and even when the Ravens scored 10 third quarter points you only would have been down 20-13 as compared to 20-9, which is a big difference. While the Steelers offense is at fault on finishing drives, also remember the Ravens were ranked fourth during the season in redzone defense, so it just added up to a long night scoring touchdowns.

2. Ben Tate – Why? – This may have been the most head scratching decision in the tenure of Mike Tomlin. You lose the leading rusher on the team, and instead of playing the true guy behind him from the start in Josh Harris (or even Dri Archer), you put a guy in the game who has been on the team for five days. Sure, Tate actually looked okay on the first carry and catch, but why is he touching the ball on four of the first five offensive plays?! Tate caught one pass and had four carries on the teams first drive, and the rest of the night had one carry, and caught one pass, but was also the main culprit in a huge nail in the Steelers coffin, a tipped pass deep in Steelers territory that was picked off by Terrell Suggs. If this team had no confidence in Josh Harris, they should have went out and gotten another veteran back sooner after they dumped LeGarrette Blount, who is probably laughing today as he rests up and gets ready for a playoff game with the Patriots next Sunday.

3. The O-line picked a Bad Night to Be Bad – After having such a good December keeping Ben Roethlisberger clean, the O-line Saturday really didn’t play very well, which was a huge reason as to Ben having to race around and try to make plays. On the night Ben was sacked five times, but that number easily could have been 8-10 as he was close a number of times to going down. Mike Adams, who should never wear a Steelers uniform again, allowed a sack when he came in for Marcus Gilbert, who also didn’t play very well. While it was evident early that the run game was going to be limited at best during the night, if they could have protected Ben and given him time it would have made things a lot more interesting in the second half.

4. Turnovers and Penalties will Lose you Games Quickly – Pretty easy to look at two big stats to see why the Steelers won’t play a meaningful game again till September – three turnovers and 8 flags for 114 yards. I know there’s plenty of people that think the Steelers got hosed as far as penalties go (even ESPN’s Mike Greenberg tweeted that today), but at the same time, some were self inflicted (Mike Mitchell’s out of bounds hit, David DeCastro’s false start at the one), and it cost this team dearly. The turnovers were awful as well, with the Suggs pick being the play that salted the game away as the Ravens scored on the next play to make it 30-15 as opposed to 23-15. As Tomlin said in his post, these games come down to turnovers, and the Steelers did themselves no favors in this one.

5. Defensive Backfield Didn’t Play Nearly As Well as the Last Few Weeks – The young guys had their chances, as Brice McCain dropped a pick that could have changed things, but overall the defensive backs and safeties were below average to downright bad as they were earlier in the year. The bad thing is this time you couldn’t blame guys like Ike Taylor and Cortez Allen, and instead it was players like McCain, Antwon Blake and, of course, Mitchell who were burned a good portion of the night. When Joe Flacco needed a big play or a throw to get a first, he usually got it, and it shows just how badly the Steelers need to either draft a big time CB or get one via free agency.