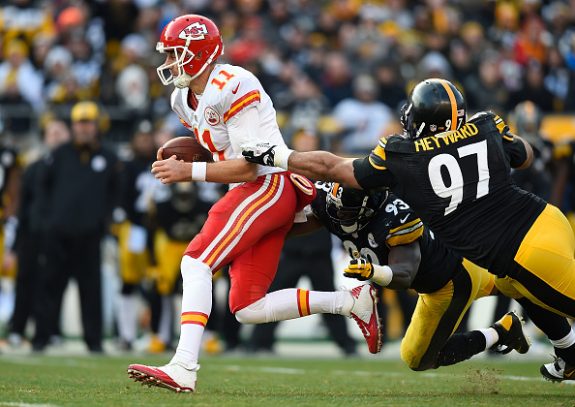 The wild card loss to the Ravens was frustrating for so many reasons, but one of the big ones was the fact that Ravens QB Joe Flacco seemed to have forever to throw the football.

When Flacco rolled out no one seemed to be able to catch up to him, and on the Ravens TD that increased the lead to 20-9 he escaped pressure a few times.

“We need to be able to pressure the quarterback more consistently,” team president Art Rooney II said, per the Pittsburgh Tribune-Review.

“I think that as a defense, we’ve got to get more sacks and put more pressure on the quarterback. That’s a key piece of the puzzle we have to look at as we build this defense going into next year.”

A lot of that is placed solely on a group of young players, linebackers and D-linemen who need to step up, make a LOT more plays, and make sure there’s heat on the QB in or outside the pocket.

James Harrison is 36 and a free agent, and while one would think he would be open to a return, the team can’t count on just him, and they need production from players like Jarvis Jones, Ryan Shazier, Stephon Tuitt and others to turn up the heat on QB’s.

In 2014 Jason Worilds had 7.5 sacks, but overall his play was down from 2013 and he’s a free agent as well. Cam Heyward seems to be stepping into his own, and he also had 7.5 sacks to tie for the team lead.

In the end though, it’s not enough, and whether it’s through the draft or free agency, the Steelers need more heat – and quickly – if this team is going to be a contender in the AFC next season.