Steelers vs Patriots Kicking Off the 2015 Season? Seems Likely 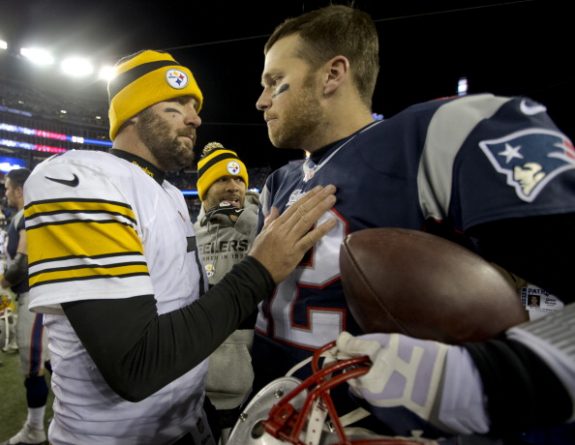 Get ready Steeler Nation – it looks like the Black and Gold could be taking on the World Champions to start the 2015 season.

Less than 24 ours after the New England Patriots beat the Seattle Seahawks in the Super Bowl, people already are asking who will New England host in the annual NFL Kickoff Game three days before the rest of the teams open their season.

That answer seems like an obvious one – the Steelers.

Yes, it’s not by any means out of the question to think that the Steelers will be in New England to play Tom Brady and the Pats in that Thursday night opener.

Here’s what NFL.com had to say about that very subject today – stating that the Steelers vs Patriots is the #1 most likely game to start 2015.

One former dynasty versus the modern-day titans. The historical storylines jump off the page. The on-field matchup would be just as great. Sure there is the Tom Brady-Ben Roethlisberger quarterback narrative network TV loves, but this one is better than that. The Steelers were one of the hottest teams down the stretch last year before Le’Veon Bell’s injury hurt their playoff chances. If Darrelle Revis returns to New England, we’d get the highly entertaining Antonio Brown-Revis faceoff.

The fun matchups go much deeper, but we’ll get into that when the schedule comes out. This would easily be my pick for opening night.

The game is set for Thursday, September 10th. If you’re wondering who else the Pats will play next year at home to see the options the NFL has, here’s the rest of the list – Buffalo Bills, Miami Dolphins, New York Jets, Jacksonville Jaguars, Tennessee Titans, Philadelphia Eagles and Washington Redskins.

The Steelers actually did open the season at New England vs the Pats in an AFC Championship Game rematch of the season before in 2001. New England won that game easily 30-14.

The last time the Steelers played in New England, it was a train wreck, as the defense was torched for 432 passing yards and four TD’s by Tom Brady in a Pats 55-31 win back on November 3rd 2013.