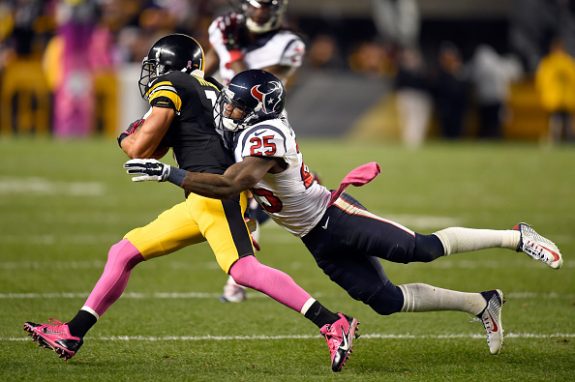 Count another unhappy Steelers player who seems to want to take his ball and go home.

Like now Super Bowl Champion RB LeGarrette Blount, who magically found his way off the Steelers and on the Patriots, another 2014 free agent wants out, that being wide out Lance Moore.

Reports say that Moore has asked for his release from the Steelers, this after grabbing just 14 passes for 198 yards and two touchdowns.

The Steelers inked Moore last March when it looked like the wide out core could be in some trouble after the team lost Emmanuel Sanders to free agency.

Moore though got hurt early, and never seemed comfortable in the Steelers offense, and eventually took a backseat to young wide outs like Markus Wheaton and draft pick Martavis Bryant.

The Steelers will have to eat $322,500 on the cap this upcoming season if they let Moore walk. He originally inked a two-year deal with the team for two-years at $3 million.

Bottom line, if he wants out – let him walk. At 31 he’s not going to get much better, and if he’s got a bad attitude about the Steelers, he can find employment elsewhere.

The Bus Stops At The Place Of Legends
Steelers vs Patriots Kicking Off the 2015 Season? Seems Likely