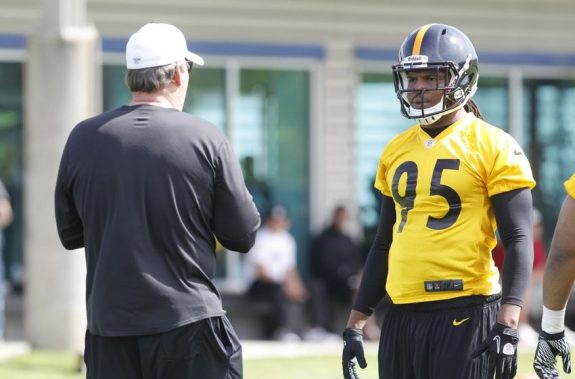 Keith Butler, new defensive coordinator of the Pittsburgh Steelers will be expected to brings different looks to the defense this season.  With more blitzes and coverage schemes, it will give more linebackers and defensive backs chances to show their versatility. Whenever there is a new coach or coordinator certain players instantly become candidates to standout.  Here are four players that could instantly improve under Butler’s tutelage.

1. Cameron Heyward DE: Butler has promised to use the 4-3 and 3-4, although Art Rooney II has promised the Steelers will not delve much from the 3-4 Pittsburgh has relied on. Heyward has proven he can beat two offensive linemen on quite a few occasions to get the quarterback.  With more 4-3 formations, Heyward could be given more one-on-one opportunities in pass rush and run plays.  With Butler calling the plays, Heyward could very easily  record ten-plus sacks and 50 tackles. Possible Pro Bowler in 2015.

2. Ryan Shazier MLB: Provided he can stay healthy, Shazier will be allowed to play more in open space.  Shazier will  have more chances to blitz on the inside and the outside on stunt defenses in order to take advantage of slower offensive tackles and guards.  His speed and athleticism will be used to cover tight ends and running backs in the flat.

3. Cortez Allen CB: Love him or hate him, unless the Steelers draft a corner in the first two rounds, or spend big money on a cornerback in free agency, Allen will be projected to start opposite William Gay. Allen has the physical skills to be number one corner.  Butler will need to figure out if Allen is better in zone or man coverage. If Allen can rebound from last season, the Steelers defense will be well above average.

4. Shamarko Thomas SS: Whether Thomas starts or not with the first-team defense, he will be next in line to play safety and cover wide receivers in the slot. Thomas makes splash plays on special teams and has the hard-hitting ability the Steelers crave.  Health is a major concern, but Thomas has the talent to play both safety positions.