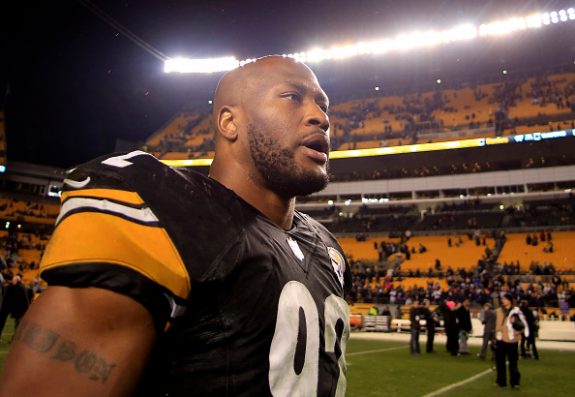 The news that broke Sunday night about James Harrison wanting to play another season in the NFL isn’t all that surprising. After all, last season there was plenty of downs that he was one of the better defenders on the field, which came as a shock based on the fact when he first came back he didn’t look like the impact player he once was.

Now that he’s going to come back, is it going to be with the Steelers? That seems to be the big question about Harrison, who according to Scott Brown of ESPN may take a trip to Tennessee to play with the Titans.

Some feel that Harrison won’t be able to reach the potential of 2014, and that it’s time for the team and the former NFL Defensive Player of the Year to have a breakup once and for all.

Harrison has a strong bond with now former defensive coordinator Dick LeBeau, and now that LeBeau is with the Titans, he could want to add Harrison as a fit for a team that needs huge upgrades on defense.

One player that is a key on if Harrison is back or not is Jarvis Jones. The former first-round pick hasn’t produced as much as the team felt he would in his first two seasons, and has just three sacks to his name at this point.

The Steelers have to see what they can get from Jones playing every down and every game. If he’s not the player the team thought they were getting and Harrison leaves to play elsewhere, the Steelers could have a major problem on their hands at outside linebacker.

It’s part of the reason why some seem to feel that the Steelers will go after an OLB early in the draft.

It’s starting to appear more and more that might not be a bad idea based on what this team may be facing if Harrison doesn’t come back.