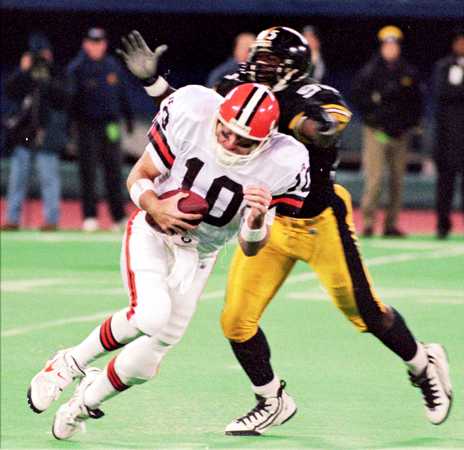 It’s one of my favorite NFL Films clips of all time: Mid-1990s Bill Cowher at the height of his jaw-jutting, spittle-spewing power on the sideline at Three Rivers Stadium coaching up outside linebacker Greg Lloyd.

A basic message to be sure, but it’s one that’s always been at the heart of the Steelers’ ability to dominate on the defensive side of the ball. That image…Cowher’s face just inches from Lloyd’s, Lloyd staring off into the distance as Cowher chops at Lloyd’s shoulder pads with his right hand…it reminds me of a simpler time. In those days, it wasn’t a matter of if the Steelers were going to get to the quarterback. It was a matter of when.

These days, quarterback pressure has become more of a roll of the dice than in years past, but that doesn’t mean all is lost. Sure, the Steelers could bring James Harrison back into the fold and hope for another year of age-defying production. It seems as if Jason Worilds’ departure in free agency is all but assured. And after two lackluster years wearing black and gold, Jarvis Jones remains a question mark.

The NFL Combine brought the skill sets of several potentially attractive edge rushers to the forefront last weekend, but the Steelers have to choose the right one (or two) with the mental and physical makeup to thrive in Keith Butler’s defense.

James Harrison’s return to Pittsburgh after one year in the orange-and-black purgatory also known as Cincinnati was a revelation for a Steelers defense that failed to consistently pressure opposing quarterbacks from one week to the next. There’s no question in my mind that Harrison has the drive to get himself into game shape one more time, but he’s going to be 37 in May. If he chooses to sign with the Steelers for 2015, does he have another 5.5-sack season as a situational pass-rusher and part-time starter in him?

The odds of Worilds returning to the Steelers in 2015 are slim purely from a financial perspective. But high price tag aside, it seemed as if opposing offenses began to figure out how to neutralize Worilds as the 2014 season wore on. Instead of allowing him to showcase his array of pass-rush moves on opposing tackles, Steelers opponents would line up a tight end or running back to Worilds’ side of the field and force him into pass coverage. The strength of Worilds’ game is at the line of scrimmage and in the opposing backfield. If he’s forced to cover rather than rush, the opposing offense already has a decided advantage.

As for Jones, I really don’t want to use this space – or any more words the English language has to offer – to illuminate his lack of health or shortage of production in his first two years in Pittsburgh. Plain and simple, Jones has to become a force of nature on the edge like those who came before him. Lloyd, Kevin Greene, Jason Gildon, Joey Porter, Clark Haggans, LaMarr Woodley…they all had stretches where they just flat-out would not be blocked. The lengths of their respective dominant stretches can – and will – be debated in the comments of this post and beyond, but each of them had quarters, halves, games and even seasons where ‘Steelers Nation’ had faith that one of their outside linebackers was going to make a play that changed a game.

No matter who winds up manning the outside linebacker spots for the Steelers in 2015, there should be but one message ringing in their ears when the ball is snapped. Rush the quarterback.

Should Vic Beasley Be At The Top Of The Pittsburgh Steelers Draft Board?
Decision for James Harrison To Stay or Go To Mean A Lot to Steelers Future