The Steelers 2015 Season A “Perfect Storm” 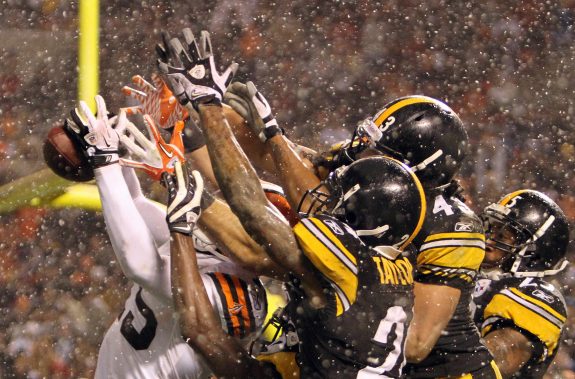 It is no easy task to get to a Super Bowl and win. It takes the right personnel, coaching, and maybe even a little luck. No one can predict a Super Bowl appearance (although Steelers fans are fairly certain every year the Steelers will win the big one), but every now and again the stars align and provide an opportunity for even more optimism.  A combination of the strength of schedule for 2015 and how the Steelers choose to rise to the level of their competitors could be the precursor to a rare set of circumstances that could result in a championship.

Much has been made about the Steelers’ inability to win against beatable teams in the past few years. It is a disturbing trend that leaves fans scratching their heads as to why. It seems they play down to the competition. There has also been a lot of chatter about the Steelers having the most difficult schedule in 2015 (.579 based upon opponents 2014 record). Their strength of schedule has the Steelers playing nine of their 16 games against playoff teams from 2014. If you take these two things separately, it makes for interesting debates and conversations. However, if you look at these things in conjunction with each other it outlines a golden opportunity for the Steelers.

The chance combination of having one of the toughest strength of schedules and the Steelers winning against teams with a losing record last occurred in 2008. The Steelers started the 2008 season with the hardest strength of schedule in the NFL (.598 based upon opponents 2007 record) with 12 of their games against teams who finished .500 or better in 2007 and eight of those teams that were playoff contenders in 2007. The Steelers finished the season with a 12-4 record and a Super Bowl Victory against the Arizona Cardinals. All of the four losses the Steelers had in 2008 came against teams with winning records and all four were playoff contenders that year (Philadelphia Eagles 9-6-1; New York Giants 12-4; Indianapolis Colts 12-4; Tennessee Titans 13-3).

After the 2008 season, the simultaneous occurrence of a high ranking strength of schedule and having a winning record against sub-par teams did not occur again, nor did the Steelers win another Super Bowl.
In 2009, not only were the Steelers ranked with one of the NFL’s easiest schedules (ranked 29th, a .598 based upon opponents 2008 record) but they also had four losses to sub .500 teams (Chicago Bears 7-9; Kansas City Chiefs 4-12; Oakland Raiders 5-11; Cleveland Browns 5-11). The Steelers would finish the season with a 9-7 record and miss the playoffs.

The Steelers came close to the ultimate prize of winning yet another Super Bowl in 2010, but fell short against the Green Bay Packers. Although the Steelers finished 12-4 in the regular season with all four of their losses coming against teams that had winning records and were playoff contenders that year (Baltimore Ravens 12-4; New Orleans Saints 11-5; New England Patriots 14-2; New York Jets 11-5), they started their season ranked 21st (.492 based upon opponents 2008 record) with their strength of schedule and seemed to falter in the end.

In 2011, the Steelers once again finished the regular season with a record of 12-4, with their four losses coming against teams with winning records and all four playoff contenders (lost twice to Baltimore Ravens 12-4; Houston Texans 10-6; San Francisco 49ers 13-3). Yet once again the Steelers started their season with an easier strength of schedule, tied for 27th in the league (.473 based upon opponent’s 2010 record). The Steelers made it to the playoffs, but lost in Wild Card game to the Denver Broncos, and again did not play up to their potential.

In 2014, the Steelers started out the season ranked 23rd (3 way tie) in strength of schedule (.469 based upon opponents 2013 record) and finished 11-5. Four of their losses were to teams with losing records (Tampa Bay Buccaneers 2-14; New York Jets 4-12; New Orleans Saints 7-9; Cleveland Browns 7-9). The season ended in a disappointing loss to the Baltimore Ravens in the playoffs.

It is also interesting to note that this trend continues to ring true for both the 1995 and 2005 Super Bowl seasons. The 1995 season, which resulted in a loss to the Dallas Cowboys in Super Bowl XXX, the Steelers were ranked 23rd out of 30 teams in strength of schedule (4.80) and finished with an 11-5 regular season record. Of the five losses in the 1995 season, four were to teams with losing records (Miami Dolphins 9-7; Minnesota Vikings 8-8; Jacksonville Jaguars 4-12; Cincinnati Bengals 7-9). However, in 2005 when the Steelers defeated the Seattle Seahawks in Super Bowl XL, the Steelers started their season ranked 12th in strength of schedule (.508) and finished 11-5 with only one loss to a sub-par team (Baltimore Ravens 6-10).

Of course it takes more than a difficult strength of schedule and beating sub-par teams to win a championship. More important things like personnel, coaching, play calling, etc. are what makes champions. However, every Super Bowl winning team always has something intangible that has propelled them to greatness. Nothing is guaranteed, but the scheduling guru’s have set the stage by providing the Steelers with the hardest schedule in 2015. If the Steelers can do their part against teams with losing records, the 2015 season could be a “Perfect Storm” of circumstances and the intangible that results in another Lombardi for the trophy case.

Decision for James Harrison To Stay or Go To Mean A Lot to Steelers Future
Steelers Gab: Cornerback analysis of free agents and draft prospects