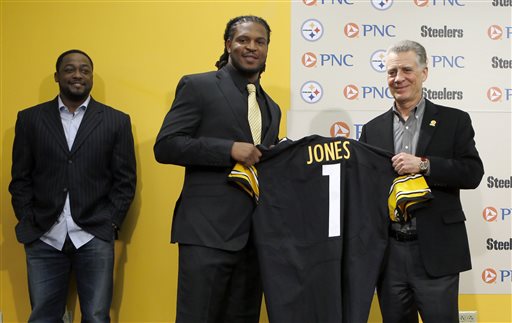 The thing to remember about draft analysis is that it doesn’t happen in a vacuum. Whether we’re looking ahead, looking back or offering knee-jerk reactions within minutes of a draft pick’s name escaping from Roger Goodell’s smarmy, double-talking-but-not-saying-anything lips, the players who are subject to our unending scrutiny are operating in the real world. What a guy did in college, the times he posted in shorts and a T-shirt at the Combine, what was written about him in Mel Kiper’s draft guide…none of that matters once a player’s name is called. From draft day forward, success is measured in the ability to learn, compete and win on the brutal proving ground that is the NFL.

I drew the 2013 straw in our weeklong look back at the Steelers’ last five draft classes, and to be honest, I hope some of the opinions offered in the space below are flat-out wrong a year from now. With the key members of the 2013 draft class entering just their third year in the league, much of their respective stories is yet to be written. The first couple of chapters have provided plenty of fodder for discussion and debate, but as time marches forward, how will these players truly be remembered? No stopwatches. No letter grades. When the lights are on and it’s time to buckle your chinstrap, are you a player or not?

OK, enough with the preamble. Let’s get into this.

The Steelers had nine picks in the 2013 draft. All but one of their picks came from a major NCAA Division I school. Eight of the nine players are currently on NFL rosters. Six of them are still with the Steelers. Five of those six could (can’t place enough emphasis on the word “could”) be in the starting lineup when the 2015 season begins this fall. The actual number of starters is probably more like three or four.

The Steelers need more from Jarvis Jones. There, I said it…again. At this point, we might as well start up a collection and order hats, shirts and coffee mugs with some version of that sentiment printed on them because every columnist, blogger, TV talking head and so-called NFL insider will be shouting this from the rooftops once training camp begins in July. Yes, Jones has been hurt off and on during his first two seasons in the league. Three measly sacks in two seasons is nowhere close to the level of production the Steelers need from a highly touted first-round pick. With the Steelers once again looking at impact edge rushers in this year’s draft, 2015 could be a make-or-break year for Jones in the Steel City.

Home run, plain and simple. Landing a franchise running back with Le’Veon Bell’s skill set in the second round of the 2013 draft may go down as one of the best picks ever made by the Kevin Colbert-Mike Tomlin regime. Bell’s three-touchdown performance in his first game as a Steeler (in that stinker of a loss to the Vikings in London) showed he had a nose for the end zone right out of the gate, but it wasn’t until last season — when Bell dropped a few pounds and became the focal point of Todd Haley’s offense – that his value truly came into focus. The knee injury Bell suffered in the 2014 season finale forced the Steelers to change their offensive approach in the playoffs and, with no running threat to speak of, the season ended in the wild-card round. Perhaps more impressive than all the yards and touchdowns Bell has accumulated in his first two seasons in the league is the fact that he’s only fumbled once 662 career touches.

After a rookie season where he struggled to get on the field because of injury, Markus Wheaton proved in 2014 that he can be a consistent presence on offense. He may well end up being supplanted in the starting lineup by Martavis Bryant, but that doesn’t mean he won’t be a vital part of the Steelers’ offensive game plan. With Todd Haley’s penchant for multiple-receiver sets, Wheaton will be on the field plenty in 2015. Last season, Wheaton hauled in 53 catches for 644 yards and two touchdowns. Not bad for a guy who is, at best, a fourth option in the passing game behind Antonio Brown, fellow 2013 draftee Bell and Heath Miller. Add Bryant to that mix on a full-time basis next season, and Wheaton could potentially drop to fifth in the pecking order. Without freakish height or game-breaking speed, look for Wheaton to develop into a reliable, chain-moving, slot receiver in the years to come.

Round 4A – Shamarko Thomas, DB (Syracuse)

Here’s where it gets interesting. I’d love to use the next few sentences to tell you that Shamarko Thomas is ready, willing and able to step in and take over for Troy Polamalu in 2015. I have no doubt that Thomas is willing to take on the role of starting strong safety in the Steelers’ defensive backfield, but I have no idea if he’s ready or able. None of us do. He hasn’t been on the field in game action enough for anyone to truly put together a fully formed analysis of his skills. I can tell you he’s a decent special teams player, but I’ve gotten to the point with Thomas that I’m actually surprised when I see No. 29 on the field. In two seasons, Thomas has started just two games (both in 2013). If Thomas is able to make an impact beginning in year three of his black-and-gold tenure, it would bolster his reputation – and the way people view the 2013 draft class.

Round 4B – Landry Jones, QB (Oklahoma)

How much do you really need out of a third-string quarterback? The Steelers must have thought highly enough of Landry Jones to select him with their second pick in the fourth round, but he hasn’t shown much in the way of skill or leadership ability that would indicate he’s anything more than a guy who wears a baseball cap and holds a clipboard on the sidelines. Wait, do they even use clipboards anymore? A tablet. He holds a tablet. OK, back to the analysis. The recent signing of Tajh Boyd could signal the end of the line for Jones in Pittsburgh. Jones may get to stick around a little while — possibly as a fourth arm in camp and a guy who gets some reps early in the preseason – but if memory serves, Tomlin was high on Boyd when he came out of Clemson in 2014. Jones has had two years to show the coaching staff he has what it takes to move up the depth chart, and he hasn’t been able to do it. Time is running out.

Not going to lie. Had to look up this guy. Had no recollection of him whatsoever, which is somewhat embarrassing for me as a diehard fan of the team. Doesn’t seem like the Steelers needed much time to decide he wasn’t a good fit because Terry Hawthorne was cut on Aug. 31, 2013. At least he made it to the end of the preseason before the Steelers send him packing. Hawthorne is currently out of football.

Round 6A – Justin Brown, WR (Oklahoma)

Hindsight is 20/20, and fair or not, Justin Brown is going to be remembered as the guy who dressed for the first six games of 2014 instead of Martavis Bryant. Brown caught 12 balls for 94 yards as the Steelers’ third receiver during the early part of last season before the team decided Bryant was ready for prime time. Brown was claimed off waivers over the winter by the Buffalo Bills. Starting over with a new team is probably best for Brown’s development in the long term. He wasn’t going to win any popularity contests in Pittsburgh as a guy who could sort of block and catch but stood in the way of Plaxico 2.0 getting on the field.

Easily the steal of the 2013 draft for the Steelers. Vince Williams has been a revelation in the middle of the Steelers’ defense the past two seasons. For Williams to have the confidence – let alone the talent – to start 11 games in Dick LeBeau’s complicated zone-blitz scheme as a rookie speaks volumes about him as a player. With the next-man-up mentality that permeates today’s NFL landscape, it’s got to be comforting for teammates, coaches and fans alike to know that Williams is waiting in the wings as a capable backup to Lawrence Timmons and Ryan Shazier in the middle. This guy is only going to get better.

After being placed on the reserve/injured list prior to the start of the 2013 season and starting the 2014 campaign on the practice squad, Nick Williams was signed by the Kansas City Chiefs last November. At 6-foot-4 and 310 pounds, Williams was drafted by the Steelers as a defensive tackle, but it appears his best fit in the NFL may be at defensive end. The Steelers did their best to hide Williams on the practice squad to give him a chance to develop into a player who deserved to dress on Sundays, but the Chiefs swooped in and grabbed him.