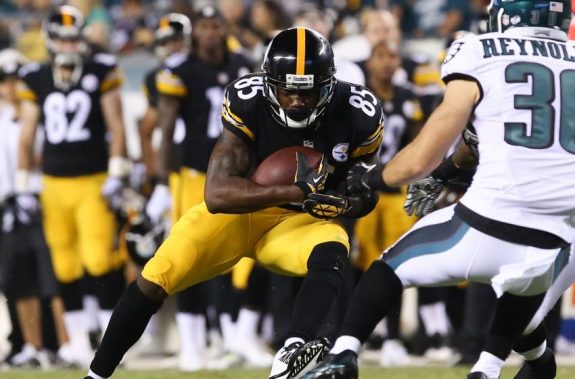 The Steelers helped out their WR core as well as their special teams units on March 26th by bringing back WR Darrius Heyward-Bey. He’s one of the top prospects that will rock NFL lines in 2015 at Mybookie.ag.

It was last season that the former first-round pick signed a one-year deal with the Steelers.

He appeared in all 16 games for the Steelers last year, though playing in just 174 snaps on offense, catching three passes for 33 yards.

More than likely in 2015 Heyward-Bey will be back in a similar depth role behind Antonio Brown, Martavis Bryant and Markus Wheaton.

In six seasons since he was first drafted by Oakland with the 7th overall pick, he’s caught 172 passes and scored just 12 times.

Heyward-Bey understands his role, and sounded grateful for the opportunity to come back to the team when they inked him to the one-year deal.

“It’s great to be back,” said Heyward-Bey. “I just wanted to stay here and be a part of a great organization and play for a great coach. That is what Coach (Mike) Tomlin is. I wanted to be back. For most guys free agency is tough, but I knew what I wanted. I knew the timing would take a little bit. For some guys it’s tough dealing with the unknown, but I knew what I wanted.

“I wanted to come back here. They have been honest with me from Day 1. In this business of the NFL, for them to be very honest with me, what they expect from me and me telling them what I expect. It’s an honest partnership.”

While it’s not a big signing, it’s one that will add depth and hopefully the speedy Heyward-Bey will continue to be able to be a standout on special teams, a unit that far too often doesn’t get the proper focus unless a team messes up a play and allows a big return.

The wide out says he doesn’t have any issues being a special teams player for the most part, and knows that it’s a key unit for a team hoping to make a Super Bowl run.

“I didn’t mind it at all. It’s all about sacrifice,” said Heyward-Bey. “I recognize a lot of people in my position wouldn’t want to do that. But I am a different type of personality. It’s all about the team. I feel like we have a great team, great leaders. If they need me to go out there on special teams and perform, I will do that.”