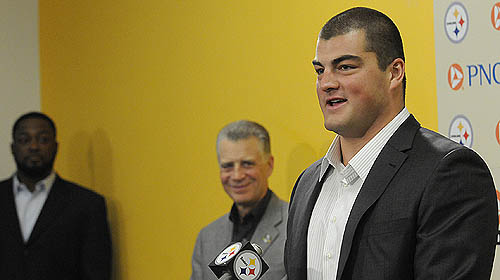 The NFL Draft is a time where anyone can be an expert and everyone is a prognosticator. The thing about the draft is, it is usually a shot in the dark. You can take all the stats and numbers and make any prospect look good. Most of the time, a rookie draft pick will not make an immediate impact on a team. The measure of success is time. To analyze a team’s draft class immediately or without at least a couple of years of experience under their collective belts is a futile venture. The bottom line is, only time will tell if the draft class was a bust or a success. The Steelers draft class of 2012 has ripened just enough that a fairly clear picture of their success or failure can be presented, and an educated analysis can be made.

The Steelers enter the 2015 NFL Draft looking to fill a need on the defensive side of the ball. That’s how they do it, not through big trades, or free agent signings, but through the draft. Not unlike this year’s draft, the Steelers entered the 2012 NFL Draft with big needs that were begging to be addressed, namely, keeping Ben Roethlisberger upright. The offensive line was a huge concern and the Steelers would clearly target players to help out in that area of need.

The Steelers had nine draft picks in the 2012 draft. Of the nine players drafted, four are still with the team, three are still in the NFL but with other teams, and two are playing in the Canadian Football League.

ROUND 1 – DAVID DECASTRO, G (Stanford)
DeCastro started his tenure with the Steelers by suffering a season-ending injury in just the third preseason game in 2012. Not a good start for the No. 1-rated guard in the 2012 draft. DeCastro came back from his injury with a passion and has started every game for the Steelers in 2013 and 2014. He has become an outstanding run blocker and has kept Ben Roethlisberger upright. Just what the Steelers had hoped for, DeCastro is rock solid on the O-line with his best years still ahead of him.
Grade: A

ROUND 2 – MIKE ADAMS, OT (Ohio State)
Adams appeared in 10 games his rookie season, starting in six of those games. He was honored with the Pittsburgh Steelers Rookie of the Year award in 2012, but unfortunately that would be his only accolade since being drafted. In his second season, Adams was benched after his fourth start for allowing a myriad of sacks off the blind side which resulted in a month full of defeats. Adams has shown little growth and only appeared in a few games as an injury replacement. Adams will more than likely finish out his rookie contract in 2015 as he has spent the majority of the contract; as a back-up tackle. Considered as a bust by many, Adams never could live up to the hype of the 2012 draft as one of the best tackles in his draft class. His lack of growth and inability to keep Roethlisberger off the ground, Adams fate seems to be sealed for the Steelers.
Grade: D

ROUND 3 – SEAN SPENCE, LB (Miami)
Spence started his career with the Steelers by being placed on the team’s Reserve/Injured list in August of 2012 and missed the entire 2012 season. His comeback for the next season was cut short once again when he was placed on the Physically Unable to Perform (PUP) list in August of 2013 and missed the entire 2013 season. Finally in 2014, Steelers fans and coaches were able to see a glimpse of his talents as Spence played in 16 games during the 2014 season, starting nine of those games. Spence finished the 2014 season with 53 tackles and 2 sacks (one of those sacks was in the playoff loss where Spence also forced a fumble). At this point, Spence is really a third year rookie. He has shown enough to prove he can play at this level, but does not have enough in-game experience to make an educated analysis.
Grade: Unknown

ROUND 4 – ALAMEDA TA’AMU, DT (Washington)
The Steelers traded their number six pick to move up 10 spots to draft what was thought to be Casey Hampton’s future replacement. Ta’amu started his rookie season off by being suspended for two weeks in October of 2012 for an off-field incident after leading police on a drunken chase through the streets of Pittsburgh. Ta’amu was then released by the Steelers on November 12th of 2012, without playing in a game. He was re-signed on November 15th 2012. He spent seven games of his rookie season being inactive and six games were spent on the practice squad. Ta’amu failed to make the 53 man roster for the Steelers in 2013 and was claimed by the Arizona Cardinals. Without ever seeing Ta’amu suit up for a game, this one is a definite bust.
Grade: F

ROUND 7 – DAVID PAULSON, TE (Oregon)
(Compensatory Pick)
Paulson played the 2012 and 2013 seasons for the Steelers without much production. He garnered 13 receptions in those two years and was eventually cut by the Steelers before the 2014 season. Paulson was signed in 2014 by the San Diego Chargers.
Grade: No Grade

TERRENCE FREDERICK, CB (Texas A&M)
(Compensatory Pick)
Frederick was waived by the Steelers in September 2012 and never played a down for the team. He was claimed by the Giants and eventually found his way to the Saints.
Grade: No Grade

KELVIN BEACHUM, T (SMU)
(Compensatory Pick)
As the last pick of the Steelers 2012 draft, Beachum was a long shot at best. Beachum was (and probably still is) one the shortest, lightest left tackles in the NFL. But what he lacks for in size, he makes up for in determination and technique. Beachum has become entrenched as the Steelers starter at left tackle, a position he took from Mike Adams in 2013 and has not relinquished. Beachum still has some kinks to work out, but his future looks very bright.
Grade: A+