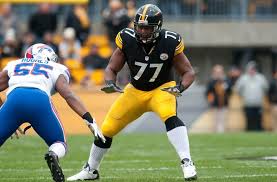 The Pittsburgh Steelers had a total of 7 picks in the 2011 NFL draft. When you analyses drafts it usually takes 4 years to determine the grade of the picks. As we take a look back we can now decide if this draft was deem a success. In 2010 Pittsburgh was coming fresh off of a super bowl lost to the Green packers so they had late draft choices in each round.

1St Round pick- Cameron Heyward Defensive End (Ohio State)– Heyward was selected with the 31st pick in the Draft and has been a very solid pick. His career started slow because he didn’t play much in first 2 years but has been a player that you can build your defense around. A high effort, team first guy who generates constant pressure which is hard to do for an end in the 3-4 scheme. A great pick who should be signed to a long term deal at the beginning of this season.

2nd pick- Marcus Gilbert Tackle (Florida) – Marcus Gilbert was selected in the 2nd round of the 2011 draft from Florida. This past offseason The Steelers resigned Gilbert to a 30 million dollar deal. He has been an up and down player. He had a decent season last year as the offensive line developed good chemistry towards the end of the season. When he was drafted he had a 3rd or 4th round grade. I think the Steelers reached but had to get a tackle because the offensive line was a mess at the time. Gilbert was selected 1 pick before Randall Cobb and 7 before Justin Houston.

3rd pick- Curtis Brown Cornerback (Texas) – This has to be the worst pick of this draft. Brown never developed the way the Steelers hope and was cut last year. He never started a game in his career and was used mainly on special teams. I think this pick haunts them to this day as a reason why they still need help in the defense backfield.

4th round pick- Cortez Allen Cornerback (The Citadel) – Allen was absolutely horrible last year and was benched near the end of the season. I think Cortez just lost his confidence but has been okay for Pittsburgh. He was rewarded with a nice contract 2 years ago but the book is still out on Allen and will have a fair chance to rebound off of last year’s performance. Cortez was taken one pick for tight end Julius Thomas.

5th round- Chris Carter outside linebacker (Fresno State) – Chris Carter made the roster for a couple of years and was also mainly a special team’s guy. Carter started a few games but never stood out and was waived in 2013. He had 19 tackles in his NFL career and is currently with the Cincinnati Bengals.

6th round -Keith Williams Guard (Nebraska) – Williams only played in 2 games in his NFL career was waived in 2011 and picked up by the Buffalo Bills. He is currently with the Arizona rattlers on the arena football league.

7th round – Baron Batch Running Back (Texas tech)– Batch might have had a chance to be a decent player but tore his ACL in training camp. He didn’t impress the Steelers in camp and might have replace Mewalde Moore as the teams 3rd down back. Batch is no longer in the NFL but considering the rest of the choices in this draft this one was a better one.

Looking back at the choices in the draft it’s not really much to like here other than Heyward, Gilbert and Allen. Out of the 7 picks only 3 still remain with the team and 2 are marginal starters. Cam Heyward is the cream of the crop in this class and I would give the Steelers an overall grade as a D looking back.

Curtis Brown might have been the worst pick in the draft but you could question Carter and Williams also. You will never totally hit on your draft picks but if the Steelers would have found a way to draft a little better the depth might be a little more solid. I think this draft is one of the reason why we had 2 back to back 8-8 seasons and are still searching for more viable options on defense.