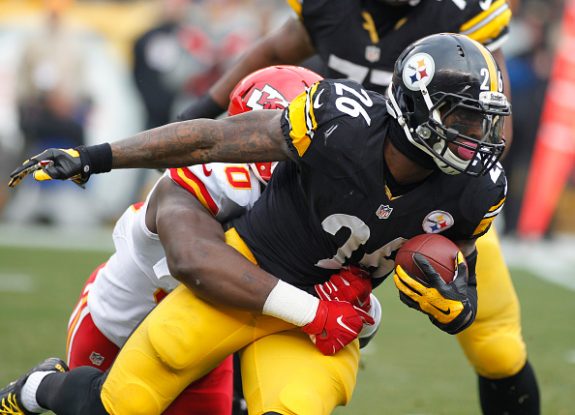 It was a suspension you felt coming – but at the end of the day it was a shock to most to see how bad Roger Goodell put the hammer down on Steelers all-pro running back Le’Veon Bell.

It was announced today that the back is facing a three-game suspension stemming from his August arrest on drug and DUI charges.

Why is three games and a game check so shocking? Then-Steelers teammate LeGarrette Blount only is going to miss a game as a member of the champion Patriots, a game that could be the season opener on the Thursday night kickoff game against the Steelers – though that has yet to be announced.

Bell and Blount were arrested August 20th after police said they found about three-fourths of an ounce of marijuana in Bell’s car during a traffic stop.

Bell received 15 months’ probation in a first offender’s program and his license was suspended for 60 days.

Blount, who had his charge dropped on the condition he complete 50 hours of community service, was suspended one game earlier this week.

The suspension may not stand fully, as Bell will be appealing, but at the same time, this is the very reason the team went out and got DeAngelo Williams in free agency.

Hopefully best case they reduce the suspension by a game to two, and Williams dominates his first two games on the ground for the black and gold.