Blast Furnace: Time was right for Polamalu to step aside 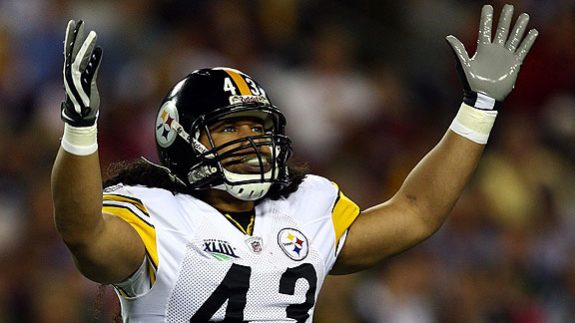 This is the right way for Troy Polamalu’s career to come to an end. As a Pittsburgh Steeler.

Sure, Polamalu could have announced yesterday that he was following Dick LeBeau to Tennessee or joining Bruce Arians in the desert. He likely could have played another year or two as a part-time guy, but a career as dynamic as Polamalu’s shouldn’t end anywhere else but in the city where he made his mark. The alternative would have been sad – like Franco Harris in a Seahawks uniform sad.

For 12 years, Polamalu patrolled the Steelers’ defensive backfield with reckless abandon. There was no half speed in Polamalu’s game. No slowing down when the play was on the other side of the field. In his prime, opposing coaches, coordinators and quarterbacks would make no secret of the fact that their first order of business when playing the Steelers was to find No. 43.

Though his career was never about numbers, Polamalu did amass some impressive ones over the years – 602 solo tackles, 111 passes defensed, 35 interceptions, 12.5 sacks, seven fumble recoveries, six touchdowns and oh yes, a pair of Super Bowl rings.

The obvious downside to Polamalu’s kamikaze style of play from his strong safety spot was the spate of injuries he sustained over the years. He played a full 16 games in just six of his 12 seasons in the NFL, losing time to myriad mechanical injuries and concussions. The toughness he displayed through it all was what endeared him most to Steeler Nation. And the hair. People seemed to like the hair.

While much of what fans will remember about Polamalu’s game is the sheer violence he perpetrated on opposing ball carriers, the way he went about his business off the field – even between plays – made him a walking, talking contradiction. His soft-spoken nature and propensity for prayer belied the havoc he created between the white lines.

With so many signature plays filling up his highlight reel, it was difficult to watch Polamalu become less effective in recent years. The cumulative effect of age, injuries and changes in his supporting cast served to expose the shortcomings of a once-in-a-generation talent.

Polamalu was given the freedom to take chances in the Steelers’ defensive system, but too often in the past couple of seasons, it seemed as if the game was passing him by. Memories of Polamalu leaping over the line of scrimmage to destroy Kerry Collins or weaving through opponents during a game-sealing interception return were replaced by silly penalties and looks of bewilderment on the sideline.

Sure, the Steelers’ front office forced Polamalu’s hand a bit by approaching over the winter to let him know he wasn’t in the team’s future plans, but yesterday’s announcement was a dignified end to a distinguished career. And Polamalu need not worry about missing the chance to be in Canton, Ohio, for the Steelers’ preseason opener against Minnesota on Aug. 9. He’ll get his own bust in Canton – and one of those hideous yellow Hall of Fame jackets – soon enough.

Now all we have to worry about is whether the Steelers’ equipment staff will put No. 43 in mothballs or if we’re going to have to endure the lingering weirdness of some fifth-string tailback running around the practice fields at St. Vincent this summer in Polamalu’s old number.