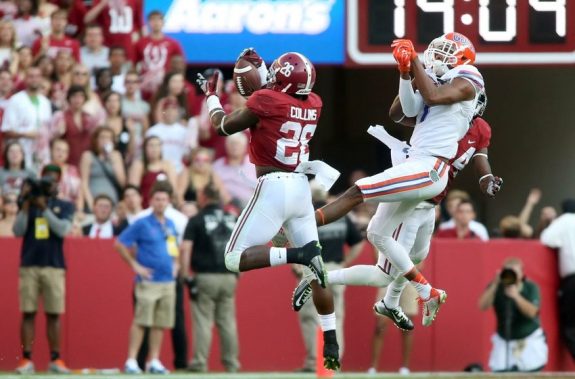 Collins is considered one of the top safeties in the 2015 Draft Class, but projections have not been consistent on where he will end up on the board.  His NFL Scoutin  mng Combine score was 6.33.

Collins played 41 games in his career with the Tide.  As a junior in 2014, Collins was voted unanimous first-team All-American, was a first-team All-SEC selection and finalist for the Nagurski Award, Lott IMPACT Trophy and Jim Thorpe Ward.  Collins led Alabama in tackles (103) and interceptions (3) while playing both the strong and free safety positions.

Collins’ strengths in college were that he played decisively against the run and is able to leverage running backs to the sideline and contain.  A patient stalker, his ability to accelerate to the ball is a plus.  With an intimidating demeanor on the field and explosive tackles, Collins wraps up when tackling and is physical in matchups against tight ends and big, slot receivers.  Collins has excellent field awareness and is able to transition, even in the zone, to limit yards after the catch.  Not one to be duped by quarterbacks, Collins is known to play the ball and would be a core special-teams player.

Collins will need some work on his ability to snare easy interceptions and stay close to receiver in the deep backfield.  With his aggressive attack style, Collins is stronger on the attack than being patient in coverage.  This will be an area where the young safety will need to develop more confidence.