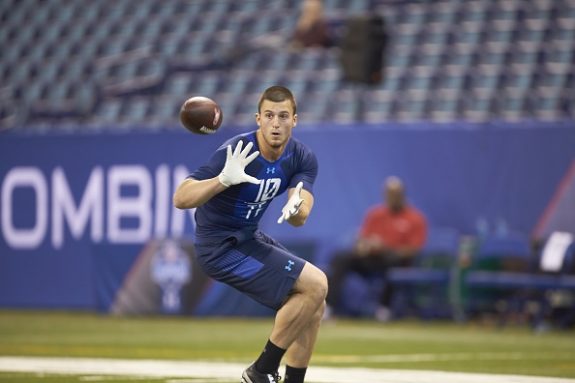 The Steelers in round five of Saturday’s NFL Draft took Penn State tight end Jesse James, a player who comes in at 6-7, 261 pounds.

Here’s some info on James from ESPN:

At 6-7 and 261 pounds, James is the prototype in terms of physical measurables. However, he has average athleticism, needs a lot of refining with his routes and doesn’t always create adequate separation. In addition, he needs to play with a much aggressive demeanor especially as a run-blocker.

Here’s more info on James from the Pittsburgh Post Gazette

He becomes only the second draft pick on offense they have made in their top five.

James stands 6-7 and weighs 261. He is the first Nittany Lions player drafted by the Steelers in six years. He started every game the past two seasons and leaves Penn State with a year of eligibility left.

And even more on James from CBS Sports

The weak senior class could open the door for some talented underclassmen to consider making the early jump to the NFL. Among the more intriguing is Penn State’s Jesse James, a 6-foot-7, 254-pound junior who supplied a few of the only memorable plays for the home team in an otherwise ugly 20-19 loss in Happy Valley to Big Ten newcomer Maryland.

Though he caught only five passes for 48 yards, James showed the combination of size, agility and acceleration that project well to the NFL. The highlight was James’ 8-yard touchdown in the third quarter that staked Penn State to a 16-7 lead. Lining up wide opposite 6-1, 200-pound cornerback Sean Davis, James used his height, leaping ability and strong hands to pluck the fade from Christian Hackenberg out of the air.

Scouts would like to have seen James get both feet down before he tumbled out of the end zone, per the NFL rule. But in college he only needs to get one down and he did so, firmly planting his right foot before he and Davis fell to the turf.