Reduced Role Coming for Steelers LB Harrison According to Porter 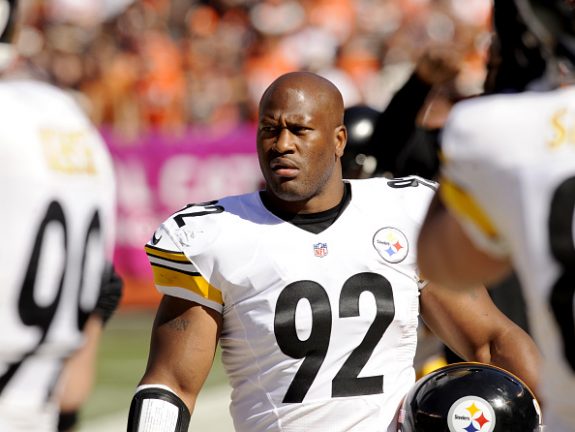 If you watch the numerous workout videos that Steelers linebacker James Harrison has been positing since the offseason started, it sure doesn’t look like a guy on the backside of his career.

“He knows where he is,” Porter said Saturday, per the Pittsburgh Tribune-Review. “I told him already, the James Harrison (of before) is over.”

Harrison will turn 37 on Monday, and last season came back to the team after walking away until the Steelers called him after a wrist injury to OLB Jarvis Jones left them thin at the position.

The team needs to get young on defense, and they did their best at that over the weekend with the drafting of first round pick Bud Dupree from Kentucky, and a number of other defensive players they hope can eventually step into roles on the team.

Don’t count Harrison out yet. Maybe Porter is playing some mind games with the veteran, as he sure looks like a guy who is motivated to go out and do whatever he can to again be a major player on a Steelers defense that will look a lot different in 2015.

Steelers Draft Jim Thorpe Winner Safety Gerod Holliman in Round 7
Cover One: Breaking Down The Aftermath Of The 2015 Draft