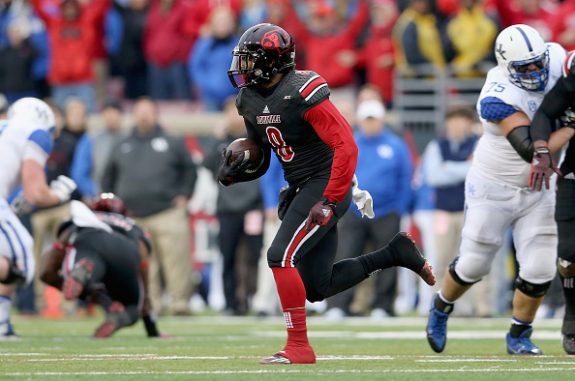 The draft is over for the Steelers, as in round seven the team took safety Gerod Holliman.

The Louisivlle safety will come with a solid resume, as he led the NCAA with 14 interceptions last season.

Here’s a piece on Holliman from Peter King on SI:

Gerod Holliman’s collegiate career was defined by the number 14. In his first full season as a starter, the redshirt sophomore burst onto the scene with 14 interceptions in 13 games for Louisville in 2014. And he’s part of the reason more NFL personnel showed up at the school’s pro day, held Wednesday, than one year ago. Three Cardinals went in the first round last May, including quarterback Teddy Bridgewater.

How does one get 14 picks in a season, a mark that tied the Division I single-season record? Bad quarterbacking, surely. And tipped balls, right?

Wrong. Only two of the free safety’s interceptions were off redirected passes. And he had his best performances in tight games against conference foes, including a two-interception showcase against Florida State and presumed No. 1 overall pick Jameis Winston. (Louisville led that game in the fourth quarter before Winston brought the Noles back for a 42-31 victory.)

2014: Won Thorpe Award (given to nation’s best DB). First-team All-American. First-team All-ACC. Played in all 13 games with nine starts. Led FBS with 14 INT. That ties the FBS record for a single season (Al Worley, Washington, 1968). 2013: Played in 11 games with two starts. 2012: Played in three games before suffering a shoulder injury and missed the rest of the season. Received a redshirt.

Strengths Outstanding production and ball skills as a one-year starter. Totaled 17 passes defensed and 14 interceptions. Lights up when quarterbacks look his way. Smooth backpedal and fluid hips to mirror and match slot receivers. Instincts and angles to play the ball are at the top of the draft class. Understands route concepts and reads quarterbacks. Chance taker who can swing momentum. In man, undercuts routes and plays the ball. Senses when quarterbacks lock in and will leave his area looking for the interception. Aggression level ratchets up when ball is in the air. Can run through receivers with big hits or play ball at catch point. Soft hands and able to high point when necessary. Shows zero transitional hesitation with feet. Can play with sudden movements in space. Read Florida State QB Jameis Winston like a book and picked him twice in 2014.

Weaknesses One-year wonder. Discipline needed for the position goes missing. Can be moved around field by quarterbacks looking him off. Will lose inside-out leverage on plays headed to perimeter. Sits on play-action a shade too long. Shows lack of urgency in long pursuit. Atrocious tackler. Would rather hit than tackle. Doesn’t wrap up and gives limited effort. Had 44 total tackles with 20 missed and/or broken tackles, which was the worst ratio for an FBS starter. Slow to break down in space and lacks balance and base when tackling. Doesn’t always play at full speed or with max effort. Gives half-hearted attempt as high-to-low blitzer.
Draft Projection Round 4 or 5