Steelers agree to terms with Cameron Clear and 11 other rookies 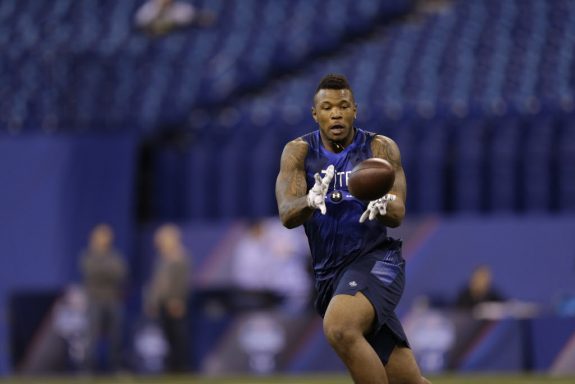 The 2015 NFL Draft began late Thursday night and continued into Saturday, making the weekend a busy one for the Pittsburgh Steelers. After adding eight players via the draft, the Steelers announced that they had agreed to terms with twelve undrafted rookie free agents. All rookies, including those taken in the draft, will participate in the team’s rookie minicamp May 8-10.

Outside linebacker Bud Dupree was selected in the first round out of the University of Kentucky. Cornerbacks Senquez Golson and Doran Grant were added in the second- and fourth-round respectively. Wide receiver Sammie Coates of Auburn University was selected in the third round. Tight end Jessee James, a local product from Penn State, was selected in the fifth round. In the sixth round, the Steelers had two selections and grabbed defensive tackle/end L.T. Walton from Central Michigan and outside linebacker Anthony Chickillo of Miami. Rounding out the last day of the draft, the Steelers picked Louisville safety Gerod Holliman.

With the draft class firmly established with depth for a Steelers defense that needed help along the front seven and in the backfield, Pittsburgh focused more on the offensive side of the ball in who they made agreements with in undrafted rookie free agents.

(Note: This article was originally posted by the author on Examiner.com under a different headline; used with permission)

Reduced Role Coming for Steelers LB Harrison According to Porter
Steelers: The Good ‘Problem’ That Receiver Talent Has Created