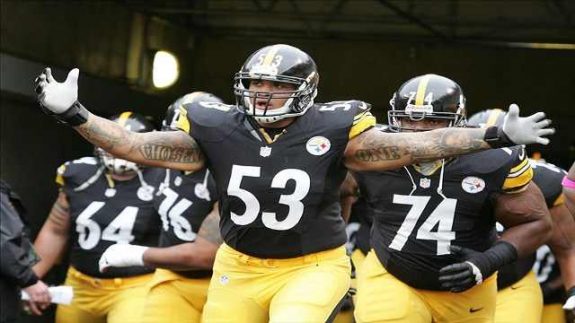 For five consecutive years, NFL players have voted on the top 100 colleagues in the league for a special series to be aired on NFL Network.  According to players who voted, Pittsburgh Steelers Center Maurkice Pouncey fits into that list.

NFL Network began airing the countdown to Number One by announcing players 100-91 on Wednesday, May 6 (at 9 p.m. Eastern).  This week, players ranked 90-81 were revealed and Pouncey came up at number 83.

Pounced is the first player at his position in NFL history to be selected to the Pro Bowl in his first three seasons in the league.  Pouncey missed his fourth season due to an injury, but was able to return to play during the 2014 season, earning another Pro Bowl appearance.

NFL Network will continue the countdown through ten total weeks, announcing the top 10 players in a two-hour special on July 8, 2015.

In 2014, the Steelers were represented on the top 100 list by quarterback Ben Roethlisberger, wide receiver Antonio Brown and safety Troy Polamalu.