No Need To Doubt DeAngelo Williams 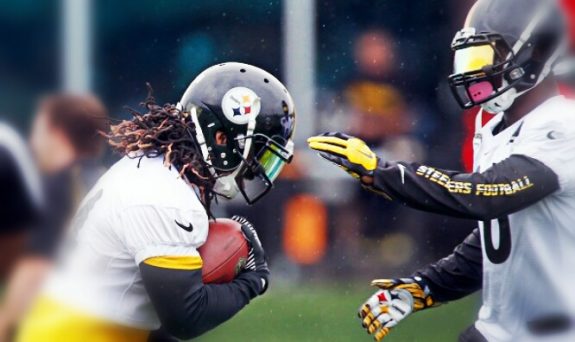 DeAngelo Williams is at the age (32) in which most running backs decline. Williams, who is known for his quickness and speed, has many doubters this off season.  Williams insists that he has a lot more left in the tank. Fans and doubters should take him at his word for several reasons.

Williams, who is the all-time leading rusher for the Carolina Panthers ,is in a great position. Williams will be playing behind a superb run- blocking offensive line that will create lanes for him as they did for Le’Veon Bell. Williams will also benefit from the elite passing game the Steelers have which should lead to only seven defenders in the box – allowing Williams to use his speed and quickness to get to the outside.The receiving skills of Williams should not be overlooked as well. Williams excels at catching screens and heading up field quickly with his straight line speed.

With fresh legs, Williams will not be asked to carry the ball 20 times each game. If Williams receives more than ten carries a game after Bell returns from suspension it will be a surprise.  The key to William’s sucess is health, which has been a problem to him in his career.

Less playing time and being surrounded by more talent should solve that problem. Williams will most certainly be an upgrade in running back depth compared to last season.  Williams could very well be the type of player who makes big plays late in the season, including the playoffs, something the Steelers needed last season.