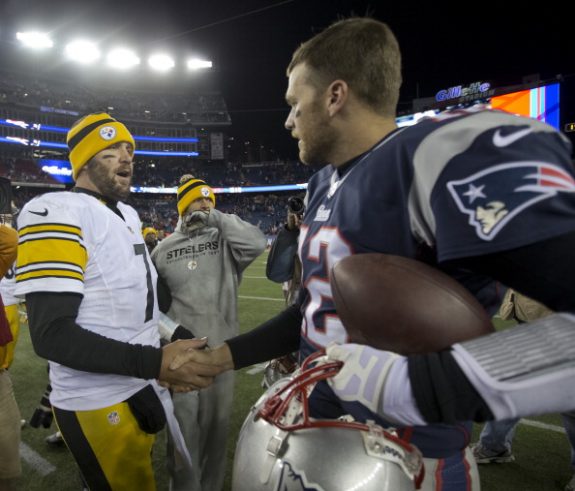 The Steelers and Patriots are now 100 days till the kickoff of the 2015 NFL season, and it couldn’t get here fast enough for Steeler Nation.

The opening night matchup is going to be over analyzed from now till the moment the ball is kicked off, and with one of the best QB’s of all-time sitting at home watching, the Steelers now suddenly appear to have the advantage.

There’s going to be a ton of storylines in the game, and Don Banks of Sports Illustrated today wrote about some of the more interesting things to look for in the matchup.

Five years later, the roles have been somewhat reversed. In 2010, it was a different multiple-Super Bowl-winning quarterback who faced a four-game suspension and missing the first month of the season due to a league-issued suspension. So while Ben Roethlisberger can no doubt feel Tom Brady’s pain, there is a bit of symmetry at work in having Big Ben’s Steelers in line to possibly benefit from the Brady-less Patriots as the season gets underway at Gillette Stadium.

?Roethlisberger, of course, sat out the early weeks of 2010 due to his involvement in a matter far more significant than the inflation level of the footballs. He was suspended for six games (later reduced to four) for a violation of the NFL’s personal conduct policy, after being accused—but never charged—of sexually assaulting a 20-year-old Georgia college student in a Milledgeville, Ga., nightclub in March of that year.

Brady may have his Deflategate suspension shortened as well once his appeal process concludes, but it still looks entirely likely that he won’t be on hand to go head-to-head against Roethlisberger for the eighth time in their stellar careers. And that’s very good news for Pittsburgh, given the Patriots are 5–2 when those two quarterbacks face off.

It’s interesting to note, as Banks does, that the Steelers in 2010 were the AFC Champions, and did well without Big Ben, losing just once in the four games he was sat out.

The only loss of the four games was a home matchup against the rival Ravens, a game in which Charlie Batch was the starting QB.

How the Pats do in the Brady-less four games remains to be seen.

The NFL’s Thursday night regular-season opener is usually an opportunity for the defending Super Bowl champions to hang a banner and take one last bow before getting back to work, but this year’s game is shaping up as the Suspension Bowl. Brady and running backs Le’Veon Bell and LeGarrette Blount all are in line to miss the game due to suspensions. Clearly anyone whose last name starts with a B is not welcome.

If anyone thinks losing LeGarrette Blount is anywhere near as big as losing Le’Veon Bell, then you obviously didn’t watch the Steelers much in 2015.

Bell is possibly one of the top three backs in the NFL, and once he got rolling last season dominated games. Blount was a front-runner and flat out crybaby in his time in a Steelers uniform, to the point where he whined when he didn’t get to play late in a critical win against the Tennessee Titans.

The Steelers will have their first look at backup DeAngelo Williams, while the Pats are expected to run backups Jonas Gray and James White.