Between the Hashmarks: Shamarko Thomas credits Troy Polamalu as mentor 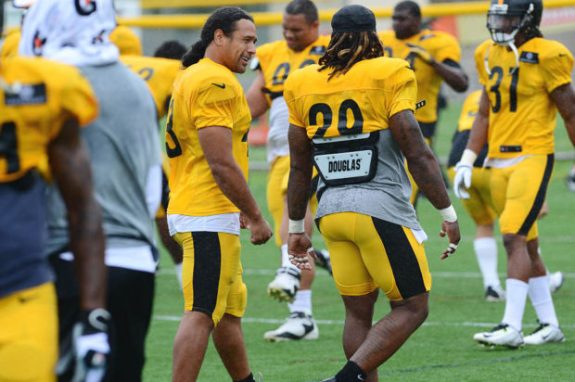 When veteran safety Troy Polamalu cleaned out his locker and left the Pittsburgh Steelers earlier this spring, he went quietly.  Despite rumors that Polamalu was ‘forced out’ or that he had mixed emotions towards the coaching staff, Polamalu was the consummate gentleman in bowing out gracefully.  The fact that he isn’t at offseason training activities (OTAs) is a bit of a strange transition for many Steelers fans and teammates, but his protégé, Shamarko Thomas, remains in regular communication with the Pro Bowl safety – and the advice he has gotten is rather remarkable.

In an article by Chris Adamski (The Steel Mill – A TribLive Blog), Thomas said on Thursday that Polamalu  is “definitely closer” than any teammate he has ever played with and that the advice he has received from the man many consider to be a future Hall of Famer has been almost fatherly in nature.

“(Polamalu) keeps my mind right,” Thomas told Adamski after practices wrapped up, “mentally and spiritually…It’s definitely weird (not having Polamalu) out here, but we’ve got young guys and we’re trying to compete and try to take the job.”

Thomas is expected to step into the huge role that Polamalu played on the Steelers defense, but Thomas isn’t looking to clone his mentor so much as to strive to be the same type of quality man and player as Polamalu has been.  Humble to the core, Polamalu’s advice according to Thomas had been to put his own expectations above those of others.  That piece of wisdom came second only to putting “God first and your family”.

In an age where football fans often look at the spirituality of a player and see a weakness or lack of aggressiveness and intensity (see Tim Tebow) on the field, Polamalu set a different standard.  By honoring his beliefs, he showed that he could remain grounded as a man and take flight as a professional football player.  Thomas, a guy known in college for making big hard-hitting plays, shares the desire to be formidable on the field and just as modest in his personal life.

Adamski said, “Perhaps that’s part of what [made] Polamalu so great yet so beloved by teammates and fans: Supreme confidence internally; unassuming modesty on the outside.”

There is no doubt that Polamalu was a sensation in Pittsburgh and that his presence will not only be missed but his leadership will be as well.  Thomas isn’t worried that he’ll miss out on either of those circumstances.  By keeping in close contact with Polamalu, Thomas made it clear that the two men share a bond that extends beyond football.  Thomas told Adamski that he approached Polamalu during the offseason his second year with the Steelers, saying that he wanted “to be great” and that the veteran told him that being that kind of player meant he needed perspective; putting his faith and family first and allowing the rest to “fall into place”.  Thomas called Polamalu a “godly man, fatherly-like man, great mentor.  I just want to be half the man he is…”

Thomas admitted to Teresa Varley of Steelers.com that even though it is harder to recreate the plays Polamalu made on the field, he isn’t trying to replace him.  “He is a different beast,” Thomas said.  “That is why he is going to be a Hall of Famer one day.”  And where does Thomas see himself?  Creating his own legacy on and off the field by being himself.

How Thomas plays will definitely have a direct effect on how the Steelers achieve success on defense in 2015.  If he doesn’t earn the starting spot, it won’t just be Thomas that is disappointed.  So far, Thomas has been working out with Antonio Brown to improve his coverage skills, listening to the advice of the coaching staff and taking Polamalu’s guidance to heart.  That Polamalu still has such an impact on the game itself is remarkable, but possibly more so in the fact that he isn’t literally at Thomas’ side to guide him.  Instead, as a spiritual brother and counselor, Polamalu is guiding Thomas to be his own man – a good one – and to not be apologetic yet put his heart and soul into being the type of player he truly desires to be.  Through it all, Thomas continues to put in the extra work to prove that he has done everything he can to be successful.