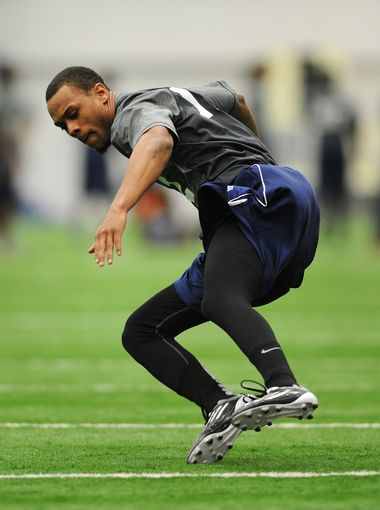 In 2014, C. J. Goodwin was a relative unknown to most NFL teams, but after a fortuitous experience working with former Pittsburgh Steelers player Mel Blount, the young man got not only a tryout but a spot on the practice squad.

During off-season training activities last week, Goodwin joined veteran quarterback Ben Roethlisburger for a bit of extra work and despite being a longshot behind Antonio Brown, Martavis Bryant, Markus Wheaton, Sammie Coates and several receivers this year feels his time with the team has been invaluable.  “Being with those guys and having them help you along the way is just a tremendous help,” Goodwin told Dale Lolley of the Observer-Reporter.  His 2015 goal – to see his name on the final 53-man roster.

The Steelers have carried as many as six receivers on the roster in the past, but it is more likely the team will want more depth at other positions, like the defensive secondary, this upcoming season.  That could mean that Goodwin will be fighting for a fifth and final spot at wideout.

Last year as a practice squad player, Goodwin illustrated an ability to get open, vertical and make athletic plays that impressed his teammates.  That Goodwin also played basketball gave him the jump many receivers just don’t possess.  Brown shared his feelings that Goodwin is hungry to be a real difference-maker and contributor, improving during the offseason. Brown credited Goodwin’s year with the team as the likely reason there has been improved play as well as an understanding of the offense.

Lolley compared Goodwin to Nate Washington, a guy who went undrafted, attended a smaller school for his collegiate football career yet signed with the Steelers and had a successful NFL career.  The Steelers could certainly use improvement on the special teams unit and with Goodwin aspiring to push hard to get a roster spot, they may find him a valuable asset to hang onto.