Tajh Boyd settling in with Steelers 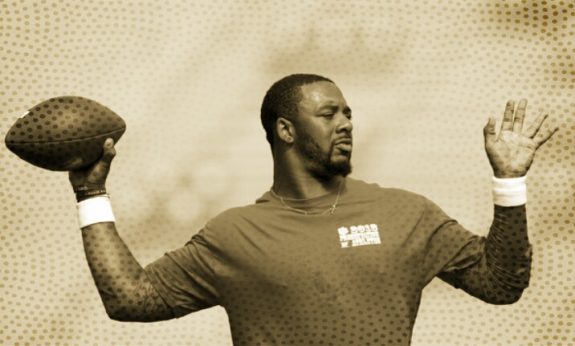 Former Clemson quarterback Tajh Boyd didn’t make a big splash when he entered the NFL after being selected in the sixth round of the 2014 Draft by the New York Jets.  Despite spending time setting college football records, Boyd found himself looking for a second chance and will get an opportunity at a fresh start with the Steelers.

Boyd didn’t become Clemson’s starting quarterback until 2011, two years after joining the team, but when he took over – watch out ACC.  Leading the Tigers to a 10-4 record, ACC Championship and Orange Bowl berth, Boyd came up in Heisman Trophy chatter.  2012 and 2013 were the type of seasons players dream of having with Boyd setting career and conference records for passing yards (11,904) and passing touchdowns (107).

Boyd isn’t the fastest, flashiest or even most versatile young quarterback but has a great shot at showcasing his skills with the Steelers at training camp after a good showing at OTAs.  Boyd is 6-1, 222 pounds, giving him an ability to see the field while bigger guys block in front of him and vision is something he wants to add to his repertoire.  “As I matured and understood who I wanted to be like, there are certain things I like from certain quarterbacks,” Boyd recently told Steelers.com’s Teresa Varley.  He admitted that the skills he liked were being able to carry oneself well in the pocket, elegance, smooth play and said, “I like Ben Roethlisberger and the way he improvises, he is second to none the way escapes the pocket and keeps his eyes downfield.”

As for motivation, Boyd has only to look at his career and his main competition – Landry Jones – to see how close he is to getting onto an NFL roster, even if it is as a backup.  Still, Boyd wants to live and play without regret.  “I am my own worst critic. I get into a perfectionist mentality knowing at the end of the day you can’t be perfect, but you can get as close to it as you can,” said Boyd.  “When I was in school I started to play for all of the wrong reasons, for the accolades, to be this popular or famous. At the end of the day that can consume you and you can lose the love of the game. I play football because it’s fun.”

Boyd wants to lay everything on the line for the team he calls “first class”.  He believes the success of Pittsburgh’s pro football organization stems from not only the hardworking people of the city, the coaching staff and Rooney family, but the mindset to never settle for anything more than the very best.  ” When we step on the field there is one mentality,” said Boyd, “and that is to win…that is what separates (the Steelers) from all the other organizations.”

Steelers Training Camp will officially kick off on Sunday, July 26, 2015 at 2:55pm at Saint Vincent College in Latrobe, Pennsylvania.  The Steelers are celebrating 50 years of training camp held at the college.  Camp runs through August 21.