Checkdown Audible: Too Soon To Label Steelers As Next Dynasty 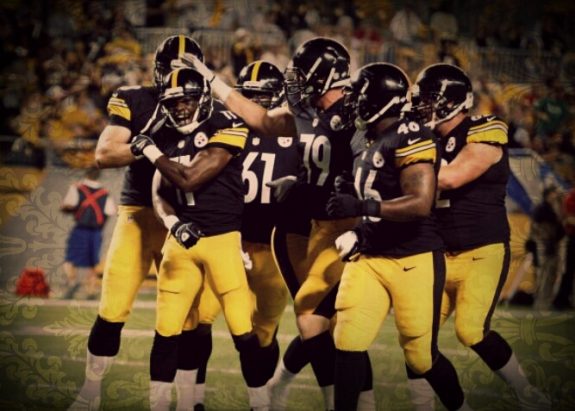 As a Steelers fan first and foremost, then a guy who covers them as a sports writer, I pay attention to the whisperings and buzz surrounding the team.  Recently, I ran across a piece by SBNation that predicted five NFL teams that would be the next dynasty in the league.  I was pleasantly surprised that Pittsburgh made the list considering the level of disdain among league fans who say they are sick of hearing about the Steelers’ six Lombardi Trophies.  At the same time, I feel that the Steelers have the potential to reach that lofty goal as champions once again.  One thing I have to say is that I believe it is too soon to attach that label onto the current team.

Danny Kelly had this to say about the Steelers:

They’ve got the franchise quarterback in Big Ben, known for his knack for big plays in big-time moments. Ben Roethlisberger, 33, isn’t getting any younger, but still has at least five years left in his illustrious career if he stays healthy. He doesn’t do it all himself, though, and it doesn’t hurt that the Steelers appear to be the league’s best evaluators in wide receiver talent, giving Roethlisberger an unending supply of speedsters to catch his passes. A focus on balance is pretty important as well, and you could make the argument that Le’Veon Bell could emerge at the top as the NFL’s best back after Adrian Peterson and Marshawn Lynch retire. Pittsburgh’s explosive, star-studded offense doesn’t appear to be going anywhere soon.

That’s only part of the equation. The Steelers also have an extremely stable and consistent owner in the Rooney family, a highly respected GM in Kevin Colbert and a tenacious and long-standing coach in Mike Tomlin. That consistency and continuity in system and philosophy helps makes Pittsburgh perennial contenders. They’ve got two Super Bowl wins in the past 10 years, which gives them a big head start in the legacy department.

The Steelers’ leadership core on defense is aging — Troy Polamalu and Ike Taylor retired; James Harrison is 37 — and Dick LeBeau is gone. However, there’s been an infusion of talent through the draft on that side of the ball that could help them continue their tradition of defensive excellence. Their young defensive talent is still a wild card, which makes this projection a little more difficult.

I never underestimate the power of the system and philosophy in Pittsburgh, and it starts from the top-down.

Kelly makes very valid points about the importance of Ben Roethlisberger, Le’Veon Bell and a handful of talented receivers like Antonio Brown and Martavis Bryant on offense with the ever-consistent Heath Miller.  The Steelers haven’t even entered training camp yet and league insiders are impressed with the potential the Steelers have this upcoming season.  Many are predicting the Steelers offense will lead the league.

There are a couple hiccups though. Brown created some early ripples with what was viewed as a possible holdout before he reported and attended OTAs voluntarily.  Brown is in the final stretch of the forward-thinking contract extension the Steelers gave him instead of Mike Wallace in 2012.  Wallace left, but is making more money per year.  With Dez Bryant (Dallas Cowboys) and Demaryius Thomas (Denver Broncos) now threatening holdouts for better career earnings, it sets the tone for Brown to plead his case to the front office in 2016-2017, the final year of his contract.