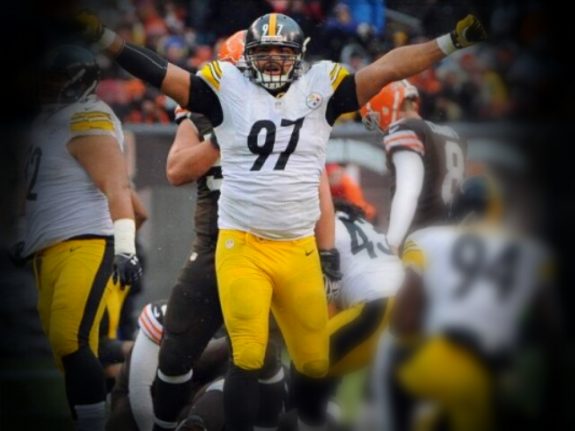 Another interesting position to look out for during the 2015 Steelers training camp is the defensive line. This group contains the unsung heroes for Pittsburgh on the defensive side of the ball.

The Steelers employ a 3-4 defense and the defensive line job is much different from most teams. Typically these groups in past years were asked to protect the linebackers, stay in their gaps and provide a constant push up front. That might change under the tutelage of Keith Butler.   The Steelers have a formidable group of starters that work well together. The weakness with this group is the lack of depth. There is a strong chance that you might see some new blood amongst the last few spots.

Cameron Heyward (Defensive end) – The undisputed leader of the defensive unit, Heyward was rewarded with a 6 year 59 million dollar extension 2 weeks ago. Tied for the team lead last year with 7.5 sacks, he will be asked to take on a bigger role this year. You can argue that he is the face of the defense.

Steve McLendon (Defensive tackle)- A 6-year undrafted pro from Troy, McLendon is in the final year of his contract. I think he will be motivated to have a good year. At times he’s unfairly compared to Casey Hampton. A good pro – the starting DT spot is his.

Stephon Tuitt – (Defensive end) – He should start opposite of Cam Heyward now that Brett Kiesel is gone. Starting at the halfway point of last year, I think he has the potential to be a really good one. Was drafted last year in the 2nd round from Notre Dame. His time is now.

Cam Thomas – (Defensive tackle) – Signed last year to provide depth. Thomas could be a camp casualty if some of the younger guys step up. He has been somewhat of a disappointment and is usually the target of Steelers fans. Needs to have a good camp just to stick.

Clifton Geathers – (Defensive end) – a 6 year pro, Pittsburgh is his 7th team. More of a camp body because of his experience. Has a chance to make the roster if the younger guys don’t impress.

Daniel McCullers – (Defensive tackle) – ‘Big Dan’ got his feet wet and did well in limited action in 2014. He should have a bigger role this year. His development could force the Steelers’ hand with McLendon.

L.T. Walton – (Defensive end) – Drafted in the 6th round of the 2015 draft from Central Michigan – the same school that produced Antonio Brown – Walton has nice size and moves very well for a man his size. He might need a year of experience to contribute. Should make the team.
Intangibles/Long-shots
Joe Kruger – (Defensive End) – Originally drafted by the Eagles in the 7th round of the 2013 draft, he played his college ball at Utah. Kruger needs to make an impact early to open some eyes.
Nico Davis – (Defensive end) – A 25 year old rookie that played his college ball at Liberty. Undrafted rookie free agent.
Matt Conratt –(Defensive end) – Conratt is a 3 year pro that got a taste of the big leagues with the Rams. Nice size at 6-7 and 306 lbs. Could impress and has some experience.
Summary
The starters of this unit are a solid group. A lot depends on how this group gels as a collective unit in training camp. If one of the starters get injured, the Steelers are thin up front. Pittsburgh needs to have some of the younger guys step up just for depth purposes.

Even ‘The People’s Champ’ The Rock Loves the Steelers
Blast Furnace: Don’t get caught up in training camp storylines