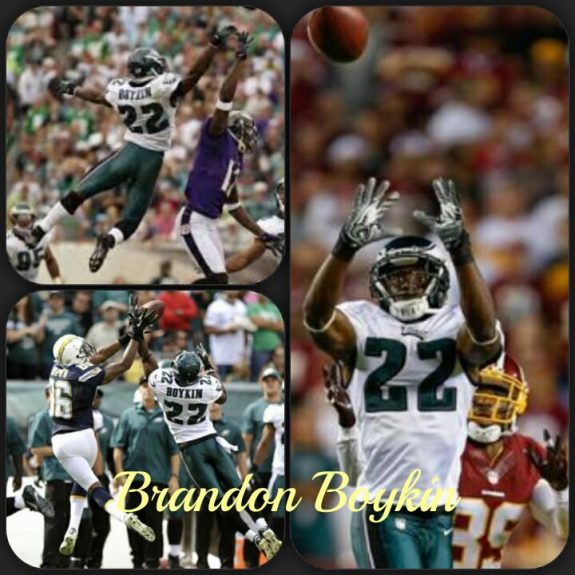 On Saturday, the Pittsburgh Steelers announced that they have signed young cornerback Brandon Boykin in a trade from the Philadelphia Eagles.  The addition became necessary as one by one Steelers cornerbacks, including Doran Grant and Senquez Golson (rookies) went on the injury report.

The trade gives the Eagles a conditional fifth-round pick in the 2016 NFL draft, but could be moved up to a fourth-rounder based on how much playing time Boykin receives; plus his value.  Boykin is the latest veteran player to be bailed out of Chip Kelly’s haberdashery – we’re talking notions, not clothing goods here.  Kelly’s medicine show has found Nick Foles, LeSean McCoy, James Casey, Evan Mathis, Todd Herremans, Cary Williams and a handful of other players headed other directions.

The Steelers began training camp with an announcement that 2015 second-rounder Golson was placed on the PUP list due to a shoulder injury that may or may not be a lingering issue from college.  Golson is expected by many insiders to miss significant time, not just in training camp, with the Steelers.

Additionally, as the first week of camp practices went into the books, veterans Cortez Allen and Mike Mitchell both had injuries, as did rookie Grant.  Leaving Will Allen, who hasn’t been put through too vigorous of training by the coaching staff, and Antwon Blake as the lone wolves in the defensive backfield.  Whether Boykin’s hiring is a sign that Golson may be a wash for 2015 altogether remains to be seen.

At 25, Boykin has seen his share of downtime.  He missed the second half of the 2014 season and was seen by some receivers, including Pittsburgh’s Antonio Brown as a bit soft early in his career.  In 2012, Brown referred to Boykin as a ‘candy bar’, inferring it was a treat to go one-on-one against him. Brown made his point by snagging a late third-down reception in the second half of the game that was key to the Steelers’ 16-14 win.

As a fellow teammate and after seeing Boykin mature as a player, Brown may be thankful to have him on the roster.  Boykin grades higher than any Steelers corner currently on the roster in pass coverage (based on 2014 totals).  At five feet, nine inches, Boykin isn’t an ideal height for an NFL corner but has shown the ability to go vertical with taller receivers.  Heading into the final year of his rookie contract, Boykin has developed into a competitive slot corner; one of just eleven players to play at least 50% of their time at that position between 2012-2014.

In June, Boykin said, “I’m just going to continue to be the best slot in the NFL…I feel like I am. I feel like my statistics show that and that’s what I’m focused on.”. Boykin has verbalized his desire to play on the outside as well as in the slot, but it wasn’t going to happen in Kelley’s system.  Whether Keith Butler sees Boykin as a potential outside corner will likely be addressed as camp progresses.

With Pittsburgh fielding one of the league’s worst pass defenses in 2014 -ranked 23rd in completion percentage allowed, 28th in yards per pass allowed, 27th in passing yards allowed per game – the team saw opponents put up passing touchdown over touchdown with little answer, giving some of the most statistically deficient quarterbacks they faced a big boost in rating.

Golson and Grant were drafted to address serious depth questions, but Boykin’s addition may be the healing balm the Steelers need at cornerback.  Pittsburgh made a sound financial deal as well.  To keep Boykin around past this upcoming season, the Steelers likely will look at a similar contract offered to Skrine of four years for $25 million (with the Jets).  Boykin has overshadowed Skrine thus far, but will have to prove himself to hunt for a figure above that.

The Steelers snagged Shaquille Richardson and Terry Hawthorne in the fifth round of the  2013 and 2014 draft (Richardson in 2014), but neither made the rookie roster and are no longer playing in the league.  The fact that they were able to reverse those moves by grabbing Boykin, drafted in a similar situation, out of Philadelphia’s pocket looks like not only a smart investment but a move that could have high returns.

Blast Furnace: Don’t get caught up in training camp storylines
Report: Steelers the Second-Biggest Road Draw in the NFL in 2015