Report: Steelers the Second-Biggest Road Draw in the NFL in 2015 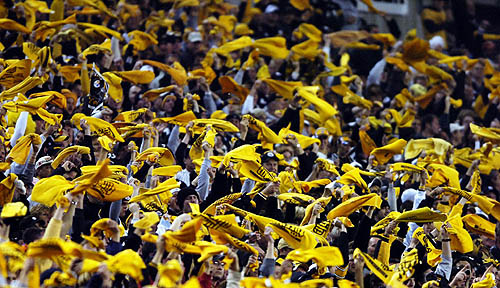 It’s never a big surprise to hear that ‘Steeler Nation’ travels to road games like no other, but it is kind of surprising to hear that heading into 2015 the black and gold are NOT the biggest road draw of the season.

CBS Sports reports that the team the Steelers lost to in Super Bowl XLV, the Green Bay Packers, are the biggest road draw for 2015 – with the Steelers as the second-biggest draw.

According to information provided to CBS Sports by SeatGeek, the Green Bay Packers are the NFL’s biggest road draw for the 2015 season.

The median price of a ticket to a game against the Packers is 57 percent higher than the team’s typical home game, according to SeatGeek’s data, which is culled from secondary market sources. After the Packers, the top five is rounded out by the Pittsburgh Steelers (53 percent), New England Patriots (45 percent), Dallas Cowboys (41 percent) and Denver Broncos (37 percent).

Hmmm – based on how much pub the Steelers get by the announcers when they are on the road, I sort of find this report hard to believe, but at the same time, it just shows just how loud and proud Steelers Nation is when they do get on the road, helping the team feel like it’s Heinz Field anywhere they go.