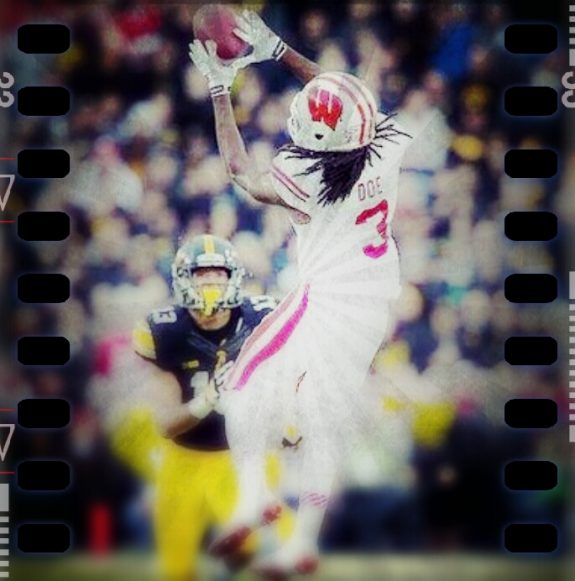 Eli Rogers was making a lot of noise during OTAs and camp with the Pittsburgh Steelers, garnering the notice of several players despite coming in as an undrafted rookie free agent from Louisville.  On Monday, Rogers suffered a right foot sprain that forced the Steelers to make a move ahead of the upcoming Hall of Fame game against the Minnesota Vikings this weekend – their first preseason game of the 2015 season.  Shortly after news was released that Pittsburgh had parted with Rogers, former Wisconsin Badgers receiver Kenzel Doe sent out a Twitter message that he had signed with the Steelers.

Blessed to officially be a part of the @steelers organization. #steelernation pic.twitter.com/nnxZUxqag9

Doe will wear the number ’82’ jersey per the Steelers’ updated roster.

Before his new opportunity in Pittsburgh, Doe had tried out as a free agent with both the Houston Texans and the New England Patriots.

At Wisconsin, Doe was considered a utility-type player that could not only catch the ball but handle special teams duties as a returner.  Doe ranks second in Badgers school history with a 25.5 yards per-return kickoff return average.  For his collegiate career, Doe played in 48 games and ranked seventh in school history in punt return yards at 481.  The five-foot, eight-inch receiver returned a total of 28 kickoffs (tied for fifth-most in school history) for 623 yards (seventh-highest in UW history) in 2014.  Doe added 24 punt returns for 253 yards while adding 17 receptions for 197 yards, averaging 11.6 yards per catch.

Report: Steelers the Second-Biggest Road Draw in the NFL in 2015
Five Jerome Bettis videos display why he is in Pro Football Hall of Fame