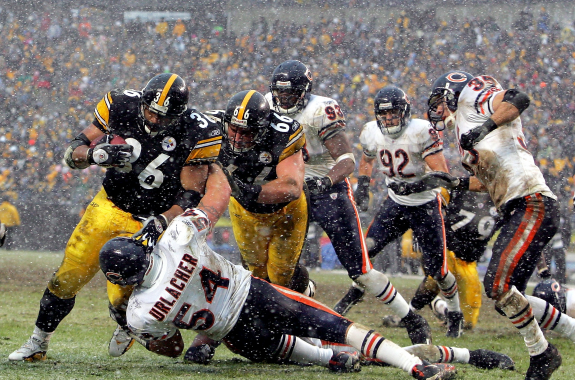 There is no doubt that the wait was worth it for former Steelers running back Jerome Bettis to be inducted into the Pro Football Hall of Fame.  Bettis will be inducted this coming Saturday.  Ahead of his special moment, here is his Hall profile and five videos that show why he is deserving of the honor.

A 255-pound best with feet that propelled him forward, Bettis picked up 13,662 yards by being one of the toughest rushers to bring to the ground.  With the Rams, Bettis won Rookie of the Year, only to move to the Steelers and become one of the most prolific running backs in the NFL for a decade.  Bettis’ personality has always been one of the best in the league and adding 91 touchdowns certainly showed why the man deserved a nod for Canton.  Bettis proved that longevity was a skill that many NFL running backs are no longer able to maintain – carrying the ball a surprising 3,479 times.  In 13 seasons, he played as a guy who could grind up yardage and pick up a first down pretty much any time the team needed him to.  Bettis finished in 2005 as a champion, winning Super Bowl XL in his hometown of Detroit with the Steelers.  In a quote on In Depth with Graham Bensinger, Bettis said, “The most satisfying moment of the whole Super Bowl week was getting the change to allow my parents to be the center of attention, because my entire career they went to every single game…”