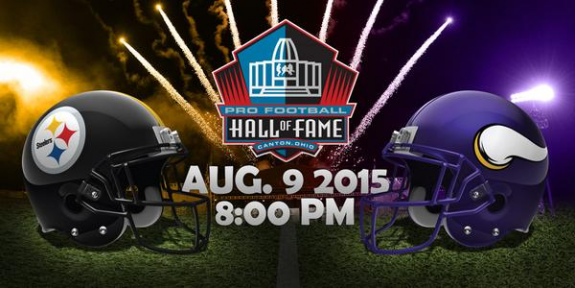 NFL fans, it’s almost time to begin the 2015 season.  The wait has been long for many of us, but on August 9, the Pittsburgh Steelers and Minnesota Vikings will face off in the Pro Football Hall of Fame Game, kicking off the preseason officially at Fawcett Stadium in Canton, Ohio.  Early odds-makers and insiders are already running the numbers and have the Vikings winning, repeating a performance similar to the one in which they beat Pittsburgh in the International Series.

Let’s take a look at the numbers and  a preview of the Vikings ahead of the game.

Odds Shark has every single major betting site giving the Vikings a three-point advantage.  Much of the chatter has been centered around the fact that Ben Roethlisberger will not be the starting quarterback for Pittsburgh while Teddy Bridgewater is primed to show that he has improved during the offseason.  Second-year coach Mike Zimmer is pushing for a revamped Vikings unit that will push for a repeat of their perfect preseason campaign in 2014.  The Vikings accomplished that without veteran running back Adrian Peterson, who returns after missing the nearly the entire 2014 season after being on commissioner Roger Goodell’s exempt list following child injury charges.  Peterson really isn’t likely to factor in during the Hall of Fame game.  He has made no indication that Zimmer will play him.

Bridgewater put together 12 starts in 13 games, completing 259 passes in 402 attempts for 2919 yards and 14 touchdowns.  With a completion rate of 64.4 but a touchdown percentage of 3.5 and 12 interceptions, he drew criticism from many NFL insiders who felt he’d been brought out a bit too soon.  In camp this year, Bridgewater has been reported to have been working on improving not only his ability to view the field, but to throw off opposing defensive backs by averting his eyes from the direction he plans to throw.  Harrison Smith recently told CBS Sports’ Pete Prisco that Bridgewater, “looks guys off in the secondary…You don’t see many guys his age doing that.  He’s already thinking, looking and finding out where we are and then using his eyes.  When he came in last year as a rookie, he was so far along.  But this is really taking the next step.”  Bridgewater improved as the 2014 season progressed, giving the impression that Minnesota is ready to attempt to take the NFC North.

On Tuesday, the Vikings released their first roster of the season ahead of the Hall of Fame game.

Behind Bridgewater will be quarterbacks Shaun Hill, Taylor Heinicke and Mike Kafka.

If you’re looking at this list and seeing some familiar names – you should.  Van Dyke spent the 2012-2013 seasons with the Steelers.  Mike Wallace (2009-12).  Trae Waynes was heavily scouted by the Steelers at corner.

Five Jerome Bettis videos display why he is in Pro Football Hall of Fame
Cover One: The Results That Steelers Training Camp Has Produced In 2015