Cover One: The Results That Steelers Training Camp Has Produced In 2015 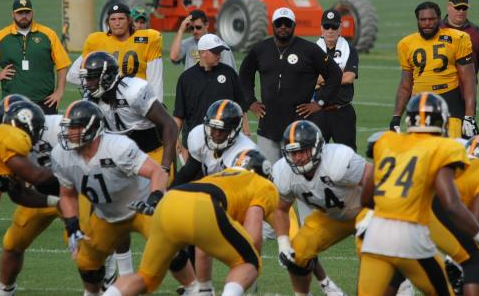 Steelers training camp has been very interesting thus far in 2015.   Every year you have to expect injuries, camp sensations, and disappointments. This year the heat and the physicality has taken a toll on many starters.  Through the pros and cons,  being optimistic is still reasonable.

Outside linebacker Anthony Chickillo has been very impressive.  Chickillo has shown an array of pass-rush moves, to go along with a non-stop motor.  The 30 pound weight loss has aided Chickillo in his acceleration.  His development is making the hot seat even warmer for Jarvis Jones. According to outside linebackers coach Joey Porter, “No more patience for Jarvis Jones”, indicates Jones’ roster spot is not guaranteed.

Shockingly quarterback Landry Jones has been decent.  Jones is projected to start this Sunday vs the Minnesota Vikings, so it will be interesting to see how well he plays with better talent. Jones still has the quick release and familiarity playing in the shotgun.  This Sunday, hopefully Jones can show he has progressed in reading the defense past his first read.

Wide receiver Sammie Coates has a chance to convince coaches he can be a vital part of the offense.  Darrius Heyward-Bey is having a great training camp, showing his skills as a receiver placing pressure on Coates to perform well the entire pre season. Heyward-Bey has also spent time with the special teams units.

When it comes to those who may risk getting cut, one player that comes to mind is safety Gerod Holliman.  Known for his coverage skills, Holliman has looked to be a step behind so far in training camp.

Middle linebacker Jordan Zumwalt also is struggling as he is having issues keeping up with some of the players in space.

With nose tackle Steve McLendon practicing well and hitting everything in site, nose tackle Daniel McCullers is currently on the second team and will need to dominate the remainder of training camp and preseason play to earn more time on the field than last season.

This Sunday will say a lot about some of the backups as they will receive more playing than usual. For some of the backups like Jones, tight end Cameron Clear, Zumwalt – just to name a few – struggle badly in Sunday’s game amd they may not make it past the first round of cuts.