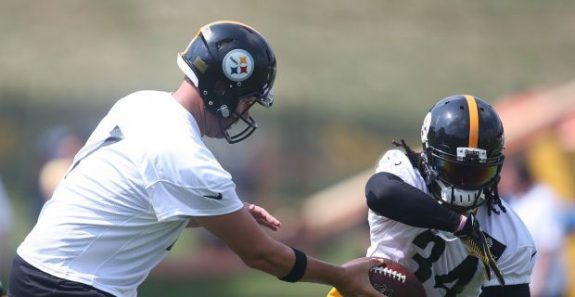 Well it couldn’t get much worse than this past Sunday in Canton as the Steelers put up just three points in a 14-3 lackluster loss to the Vikings in the Hall of Fame game.

The Steelers will play (for all intensive purposes) their first ‘real’ preseason game Friday night in Jacksonville against a Jags team they beat 17-9 in the regular season last year.

It looks like fans will get their first look at some of the starters that didn’t take the field last week, including starting QB Ben Roethlisberger, who was on the sidelines in sweats.

Here’s five things to look for during the Friday night affair with the Jaguars.

1. The Preseason Debut of Big Ben

Yes, the Steelers starting QB will take the field Friday, even if it’s just for a series or two. Mike Tomlin said that Big Ben will play about 10-12 snaps, and then we’ll see a steady diet of Landry Jones, Tajh Boyd and Tyler Murphy. The only goal for Ben is to knock some rust off against a team other than his own, and of course to be able to walk off the field fresh as a daisy and without any sort of injury to speak of.

2. Seeing some New Faces on Defense

The highlight of the Sunday loss was the teams’ fourth down stop of the Vikings early in the game, but mostly it was just an average effort with mostly backups. The team should run out some of their other starters Friday night, including Shamarko Thomas, Mike Mitchell, Cortez Allen and James Harrison. Thomas and Mitchell are the two players to watch, as it seems that a lot of the offseason concern centers around the defensive backfield. We will see how these two come out from the start.

With the unfortunate injury to Shaun Suisham, the Steelers and their fans will get their first look at new kicker Garrett Hartley, who they hope will fill the void without too many issues. Hartley has experience kicking in the biggest of games, as he was the Saints kicker when they beat the Colts in the Super Bowl in the 2009 season. Let’s hope he comes out hitting kicks right away out of the box.

4. Will New WR David Nelson Get Some Looks?

The NFL vet was inked by the Steelers this past week, and could add even more veteran depth to a wide out core that is maybe the best in the NFL. He should get some late looks in the game vs the Jags, and will be wearing #15. In five NFL seasons he has 138 career receptions good for 1,530 receiving yards. Nelson is a bigger WR at 6-foot-5 and 217 pounds, and could be an interesting find for the Steelers given the chance.

5. DeAngelo Williams Should Get the Rock a Few Times

The new backup/starter (at least for 2 games) at running back for the Steelers will make his debut on Friday, and it will be fun to see what the offseason free agent brings to the table. The run game struggled last week, with Dri Archer making about the only impact. Williams needs to get plenty of looks as he gets set to fill-in for Le’Veon Bell for weeks one and two, and Friday he should get that chance in his preseason debut.